The cyber security expert and brainpower behind a lottery rigging scandal that netted $2 million in illegal winnings from five state lotteries pleaded guilty Thursday to a felony charge of ongoing criminal conduct charge.

For the first time in an Iowa courtroom, Eddie Tipton admitted to playing a central role in the rigging scheme after more than two years of adamant denials in the face of mounting evidence against him.

Pursuant a plea agreement, Tipton, 54, now faces spending up to 25 years in prison for using his insider access to manipulate computers that performed drawings for Hot Lotto and other games that he targeted in Iowa, Oklahoma, Wisconsin, Colorado and Kansas.

When a computer selects the winning lottery numbers, it is termed a "computerized drawing". The other type of lottery drawings, which are not capable of being manipulated in this manner, are the kind with real lottery balls drawn from a spinning or agitated drum.

Lottery Post has advocated for the elimination of computerized drawings for more than a decade and described the possibility of this exact scenario many years before it was perpetrated by Tipton.  In addition to the outright rigging by Tipton, dozens of computerized drawing errors have been documented by Lottery Post over the years, some of them silently corrupting lottery drawings for months and making huge swaths of purchased lottery tickets incapable of winning.

Lottery executives have stated that computerized drawings are easier for them to coordinate and are cheaper to operate — although the actual savings of computerized drawings is suspect, especially when accounting for a drop in sales due to lower player confidence.  Tipton's guilty plea will only create more player distrust.

Tipton arrived in a Polk County courtroom around 8:30 a.m. Thursday wearing jeans and a blue shirt. His brother, Tommy Tipton, who also is pleading to a misdemeanor charge of conspiracy to commit theft, sat on a bench behind him wearing a blue tie.

As part of the plea, Eddie Tipton admitted that he wrote computer code sometime between 2005 and 2006 that allowed him to predict the winning numbers in certain lottery games. Tipton told Judge Brad McCall that when he first wrote the code he wasn't sure if he would ever use it and he did not believe at the time that he was breaking the law. "It was more of a trying to see if I could do it scenario," he said.

"I wrote software that included code that allowed me to technically predict wining numbers and I gave those numbers to other individuals who then won the lottery and shared those winnings with me," he said.

Tipton will be sentenced at a hearing on a later date. Though he faces up to 25 years in prison, there is no mandatory minimum sentence he would have to serve before being paroled. His defense attorneys will also be allowed to argue for a deferred judgment and a suspended prison sentence.

Eddie Tipton worked as the information security director at the Multi-State Lottery Association in Urbandale when he was first arrested in 2015 and charged with two counts of fraud after acquaintances recognized him on surveillance video as the hooded purchaser of a Hot Lotto ticket bought at a Des Moines convenience store. An unsuccessful attempt to cash in on that winning ticket for a $16.5 million prize ultimately led investigators to unwind the years-long scheme involving Eddie Tipton, his brother and a close friend, Robert Rhodes.

Rhodes, a Texas businessman, pleaded guilty to a fraud charge in Iowa and a computer crime charge in Wisconsin earlier this year and agreed to testify for prosecutors against both Tipton brothers. After Tipton's first arrest and conviction, investigators learned that Rhodes won a $783,000 jackpot from the Wisconsin lottery using numbers that he ultimately admitted were given to him by Tipton.

Tommy Tipton, a former Texas justice of the peace, sobbed throughout his own hearing and was immediately sentenced to 75 days in jail. Tipton admitted that he won lottery drawings in Colorado and Oklahoma using numbers that his brother had provided him.

"I apologize for my actions," he said. "It was stupid and unwise."

Eddie Tipton shook hands with Assistant Attorney General Rob Sand, who prosecuted the case, after the judge ended the hearing. Together, the Tipton brothers are expected to pay $3 million in restitution to the lotteries they targeted. Both are required to sit for a so-called "proffer" session with investigators to share details of how the scheme worked.

"Small steps down a darkened path can lead somebody a long way from where they think they are going to be to where they end up," he said. 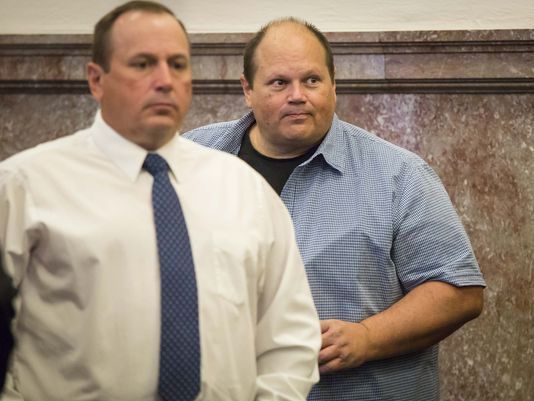