It took Texas businessman Robert Rhodes more than a year to turn against his "good old boy" best friend after he realized that Eddie Tipton would not do a deal and tell prosecutors about how he had created an elaborate system to rig lotteries in five states.

But despite fear for his safety, Rhodes is poised to give testimony at a trial scheduled for July 10 in Des Moines that prosecutors hope will finally put Tipton behind bars a decade after launching a scheme that netted $2 million in jackpots.

"Here is my best friend. And my best friend, he's a big boy. And he's a good old boy. And in Texas good old boys have lots of guns and they have pickup trucks," Rhodes said in a deposition after he agreed to testify against Tipton. "A good old boy might get pissed off and come after you."

Tipton's job at the Urbandale, Iowa-based Multi-State Lottery Association was to write software designed to pick numbers for lottery computers used for games by 37 state and territories.

Rhodes told attorneys at the deposition that Tipton would visit him at his home in Texas and they'd sit in the backyard under a tree on outdoor furniture by a chiminea stove and talk. At one point, Rhodes said Tipton told him that he'd created computer code that allowed him to predict lottery numbers for certain games on certain dates.

"I think that would be, you know, rigging the system," Rhodes said.

Rhodes, who has known Tipton since the early 1990s when they were in business together in Texas, has entered plea agreements in Iowa and Wisconsin in which he promised to testify against Tipton.

Rhodes is prepared to explain how Tipton, the computer programmer's brother Tommy Tipton, a former Texas judge, and Rhodes played a series of numbers on certain dates.

Investigators say Tipton installed software on the random number generators that worked as intended 362 days of the year, but directed them to produce predictable numbers May 27, Nov. 22 and Dec. 29 if the drawings also occurred on Wednesdays or Saturdays after 8 p.m. Even then, Tipton wouldn't know the precise winning combinations but they'd be predictable.

Rhodes said for the Wisconsin game Tipton gave him cards with hundreds of numbers on them to play and one of them hit the jackpot.

Once they won, they sought out friends and family members to cash the tickets for a share of the winnings.

The scheme defrauded seven lottery games in five states from 2005 to 2011, prosecutors say.

The program code on the Indiana and Arkansas computers apparently hadn't yet been used.

Tipton's attorney, Dean Stowers, said the programs were certified by third-party vendors responsible for verifying the random function and at no time flagged anything unusual. He denies Tipton did anything illegal.

The scheme was uncovered when the group tried to cash the $16.5 million jackpot from a December 2010 Hot Lotto ticket. Iowa Lottery officials became suspicious when a group of attorneys tried to cash the ticket without revealing who bought it.

For agreeing to testify, Rhodes avoids prison time and will be allowed to serve six months of home confinement in Texas and two years' probation. He must pay $409,000 in restitution to Wisconsin, which includes his half of the jackpot and tax refunds he received from the state.

Rhodes, 47, said he decided to confess in December of 2015 after Iowa prosecutors charged him and pressured him to testify against Tipton. The father of three children, Rhodes said he worried he'd be sent to prison for decades. He also said he believed Tipton made the wrong decision to not accept responsibility when he turned down a plea deal earlier in 2015 and went to trial.

Tipton was convicted of two counts of fraud and sentenced to 10 years in prison. But he remains free while he appeals the convictions. One count was overturned by the Iowa Court of Appeals last year and the other is before the Iowa Supreme Court. A ruling is expected soon.

"My actions were wrong, and my plea agreement there, that says that," Rhodes says in the deposition. "My business is gone. I can't do what I did. So that shows, you know, I know I'm wrong," he said.

In an ironic twist, Rhodes says he also was defrauded of $125,000 of the Wisconsin lottery winnings by a Caribbean insurance scheme.

He said a financial adviser suggested buying a business insurance policy that would give him significant tax breaks. He collected $180,000 in Wisconsin tax refunds and from the federal government but the insurance company shut down and "absconded with all of the money that was left in that policy," he said. 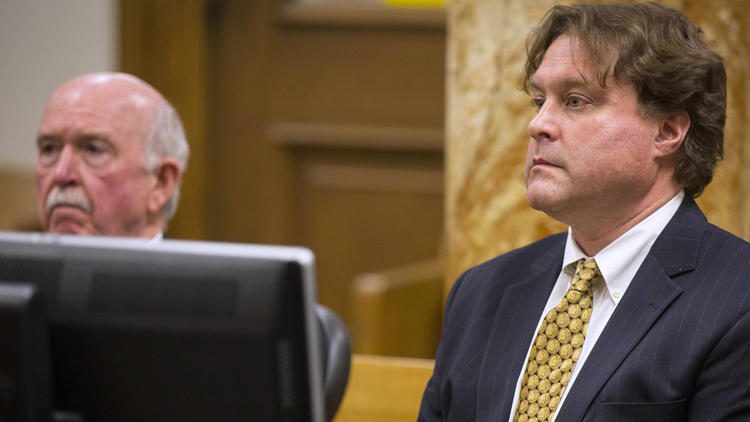