The Boston Red Sox are swinging for the Green Monster with the launch of another Massachusetts State Lottery instant ticket.

There's even some luck for people who scratch off losing tickets: They can be entered into a second-chance drawing for 10 lucky players to win a pair of Monster seats to 10 games.

Sales of the new ticket are expected to surpass $120 million, with $96.8 million in prizes and $14 million in local aid to cities and towns, according to state Treasurer Timothy Cahill.

The Lottery's partnership with the Sox has generated $705 million worth of sales, which has meant nearly $100 million in local aid for cities and towns — the most important thing the Lottery does, Cahill added.

The Lottery and the Sox introduced sports scratch tickets in 2006, the nation's first instant game to feature a Major League Baseball team logo.

"Monster Money" is the fifth Sox instant ticket. Including the latest ticket, the ballclub has netted $10 million from the licensing deal with the Lottery.

"The Lottery and the Sox are two of the best brands that we know in this part of the world," said Red Sox President/CEO Larry Lucchino. "We know its a win-win for us, the Lottery and the people of the commonwealth as the money generated goes to local aid."

Last year, the Lottery and the New England Patriots launched the NFL's first $5 instant ticket. The Pats will net $2.5 million if the tickets sell out. 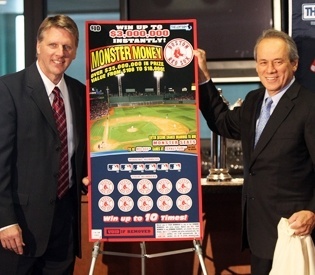