Daniel Rachek, the head of Vermont's lottery, has resigned less than a year after taking the job.

His temporary replacement, Gary Kessler, who was appointed to run the lottery in mid-September, says that Rachek's departure means the department is unable to retrieve public records that may be on his personal accounts or devices.

"He found a job that paid better that suited his skill set better, from his perspective," said Kessler, deputy commissioner of the newly merged Liquor and Lottery Department. "It sounded like a wise choice to me."

Kessler and Ed Flanagan, a member of the liquor and lottery board, said Rachek took a job in the insurance industry in Burlington, though they didn't have specifics.

"He was a great guy, we were lucky to have him," Flanagan said. "He was running an organization that generates $25 million of profits to the education fund and he was doing a great job of moving that in the right direction."

Rachek, a certified public accountant who was previously Vermont's top FBI agent, could not be reached Tuesday at two numbers listed for him.

"I was surprised — I guess not shocked," Delaney said of learning that Rachek was departing, adding that things were going smoothly without him.

Gov. Phil Scott will have to approve whoever Delaney selects.

Rachek contended before and after publication that the findings were not worrying, however both the governor and the Legislature asked for investigations into the lottery in response to the reporting.

An investigation led by Rachek found no wrongdoing. Yet he and Delaney have since enacted a series of reforms in how the lottery is managed, including a rule to prevent employees at lottery outlets from playing while on the clock.

An extensive public records request in late August sought communications between Rachek and other senior lottery officials, some dating back four years, related to the integrity and security of the lottery.

The request asked for "text messages and email exchanges from both state and personal email addresses."

In responding to that request, Kessler provided hundreds of pages of unredacted emails from state accounts related to the investigation into the lottery, but said he was unable to obtain communications on the private accounts of officials who no longer worked for the lottery. An appeal on the decision not to seek emails from personal accounts has been lodged.

"I do not have access to... their private emails or texts and thus am unable to search them pursuant to this request," he said in his official response to the request for communications involving Rachek, former lottery chair Sabina Haskell, former director Greg Smith, former chair Martha O'Conner and former lottery security head Michael Ferrant.

Haskell remains on the board of the joint Liquor and Lottery Department, which was merged this summer. The others have left the lottery. The first joint board meeting was on Aug. 8.

Kessler's decision appears to contradict a 2017 ruling by the Supreme Court that the Public Records Act applies to public records wherever they are, whether it's private email accounts or on personal mobile phones.

The court ruled that "the purpose of the PRA is to ensure that citizens can 'review and criticize' government actions. That purpose would be defeated if a state employee could shield public records by conducting business on private accounts."

The agency responding to records requests must conduct a "reasonable search" on personal accounts and devices, the court ruled. That "includes asking those individual employees or officials to provide any public records stored in their private accounts that are responsive to plaintiff's request."

Kessler said that he had not asked Rachek for records that might be responsive to the open records request.

"I don't look at it as a denial, I can't give you what I don't have," he said of emails and text messages from former lottery employees. "As a state employee I'm not the NSA, I have no way to get that."

Kessler said he wasn't sure that the precedent set in the Sorrell case applied to the lottery director.

"You could do what Mr. Toensing did and go to court and see if a court agrees that someone like Danny Rachek is at the same level as Bill Sorrell," Kessler said.

"I don't know if the law says I have an obligation to reach out to individuals and ask for documents," he added. "If the person works for us now, that's a different story."

Mike Donoghue, a longtime reporter who is executive director of the Vermont Press Association, said the intent of the Public Record Act is clear. The receiving agency must make a good faith effort to obtain all responsive records.

"In any public record request it is essential for the government agency to make a complete and thorough attempt to secure any and all records requested, including any that may be on private server or even held in a non-governmental office," Donoghue said.

Rep. John Gannon, D-Wilmington, an attorney and member of the House Government Operations Committee, said that he saw no distinction in state statute between current and former employees when it came to providing public records.

"Personal email accounts used to send work emails are public records that have to be disclosed," Gannon said. "The Toensing decision provided the guidance on how to handle this situation."

In emails from state accounts that were provided by Kessler, lottery officials were dismissive and expressed dismay at efforts to obtain records about their operations, information about agents, data on big winners and insight from lottery officials and experts around the country.

"Our Woodward and Bernstein has reached out to NH to discuss VT again," Jeff Cavender, the lottery's former director of marketing and sales, said in October 2017 of a reporter communicating with New Hampshire lottery officials about practices there, and how they compare with those in Vermont.

Ferrant, the former security director, suggested in an email to the reporter later that month that she stop chasing the lottery story. "It's very obvious to everyone here and the multiple other people you've reached out to that you're trying to create a story that simply does not exist," Ferrant said. "Consider that as you move forward."

Discussing a public records request in January 2018 related to audits and suspension of lottery agents, Rachek asks assistant attorney general Jacob Humbert for guidance on how to respond.

"I have a distinct feeling," Rachek wrote, "that this job is going to make me in (sic) an authority on the Vermont public information act." 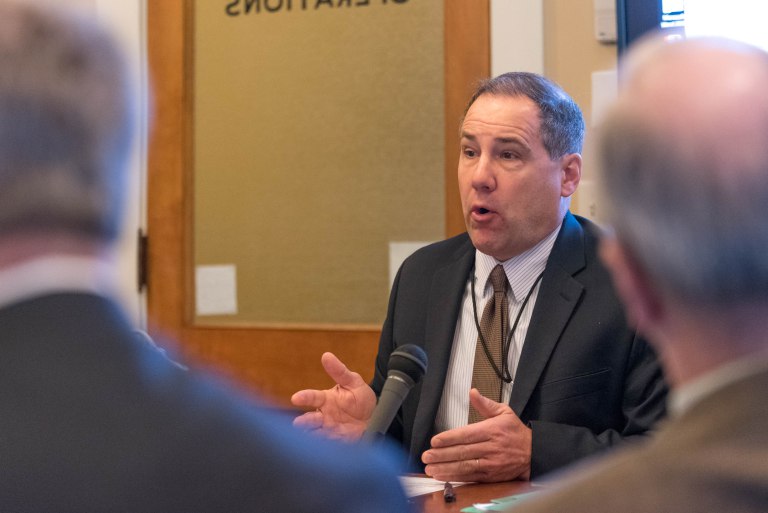