With his departure from office this week, a county medical examiner leaves behind a beguiling mystery set in motion more than three years ago with his sensational declaration that a Chicago businessman who had just won a $1 million lottery prize was poisoned by cyanide.

Cook County Medical Examiner Stephen Cina's finding that Urooj Khan's death was a homicide led to the exhumation of his body, divided his family and drew flocks of international reporters to Chicago to cover the story.

Cina, whose last day in office was Sunday, said he had not heard so much as a peep from police since handing the case over to them in early 2013.

Estranged family members who had voiced vague suspicions about Khan's wife or her father have quietly gone on with their lives. Attorneys for the man's wife say they've heard nothing and believe the investigation stalled shortly after police questioned her in January 2013.

"Yeah, I think the case has become dormant," said Al-Haroon Husain, an attorney who represented Khan's wife in a bitter probate fight with her stepdaughter and late husband's siblings over his lottery winnings and the rest of his estate. He's not even convinced there was foul play, adding that he thinks "the police have just stepped away."

Over the course of nearly four years, police say they have interviewed three family members: Khan's wife, daughter and father-in-law, who all had dinner with him the night he died. No one has ever been charged. But detectives are continuing to talk with family members, police spokesman Anthony Guglielmi said Friday.

"It is still very much an open investigation," he said.

Khan, who moved to the U.S. from Hyderabad, India, in 1989, ran a dry-cleaning businesses with his wife in the West Rogers Park neighborhood on Chicago's Northwest Side.

Though the increasingly devout Muslim had sworn off gambling after a religious pilgrimage to Saudi Arabia, Khan bought a scratch-off lottery ticket at a 7-Eleven near his home in June 2012. To his astonishment, it was a $1 million winner. He was going to use the money to pay off mortgages and expand his business.

But the 46-year-old with big dreams died on July 20, 2012, after eating dinner and going to bed. It was one day after the lottery check was issued but before he received it. Initially, the medical examiner's office ruled he died of natural causes after an external exam turned up no signs of trauma. No autopsy was conducted at the time.

But the man's anguished brother had doubts. The timing of the death and tension over the lottery win made him suspicious. At his urging, pathologists tested a peripheral blood sample.

According to Cina, who became the chief medical examiner that September, the test came back positive for cyanide. He reclassified the death as a homicide, emphasizing that he did not believe the lethal dose could have been ingested by accident.

Khan's body was exhumed in January 2013 for further tests, but by then no cyanide was detectable in the badly decomposed remains.

A settlement split Khan's estate — including the lottery check — between his daughter and her estranged stepmother.

"Everybody has their suspicions and innuendos but at the end of the day at a certain point no matter what it is, you just have to move on with your life," said the wife's attorney, Husain. 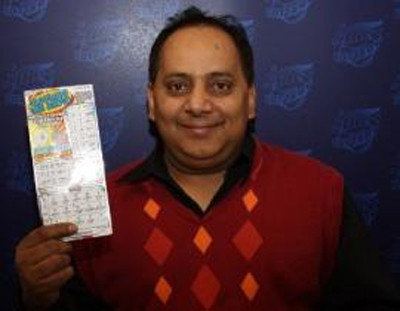