In the never-ending effort to make buying a lottery ticket new and fun, the N.C. Education Lottery has come up with tickets that smell like barbecue when you scratch them.

Lottery officials will unveil their new BBQ Bucks scratch-off tickets Tuesday at Clyde Cooper's Barbecue in downtown Raleigh and at Queen City Q in Charlotte. The $2 scratch-and-sniff tickets will bring a chance to win up to $25,000 and to enter a secondary drawing for one of 10 prizes of 100 pounds of pork and a Big Green Egg to grill it on.

It's the first scented scratch-off game for the North Carolina lottery, as the state joins a growing number selling tickets with what are meant to be appealing aromas. Colorado began selling tickets with coffee, chocolate and bouquet scents as far back as 2008. Texas, Florida and Missouri have offered chocolate tickets, too, while Nebraska unveiled Sriracha-scented scratch tickets at its state fair over the weekend.

But pig products appear to be the hot thing in lottery tickets this year, with New Hampshire, Colorado and Indiana all introducing bacon-scented tickets. In Indiana, players of the Bringin' Home the Bacon game can enter a separate drawing for a chance to win $250 worth of bacon each year for 20 years.

North Carolina lottery officials say their tickets will smell like "smoky BBQ," side-stepping the issue of whether it is eastern or western style.

"I can tell you that there was intention to make sure the ticket's scent didn't try to live up to the real thing, which the lottery is content to leave to BBQ experts, like the folks at Cooper's," said lottery spokesman Chris Bushnell. "That's why we went with a smoky scent."

The state sold nearly $2 billion in lottery tickets in the fiscal year that ended June 30, providing more than $500 million for a variety of education programs. Many legislators want to goose those sales by increasing advertising for the lottery and making a version of instant tickets available on the Internet or smartphones. 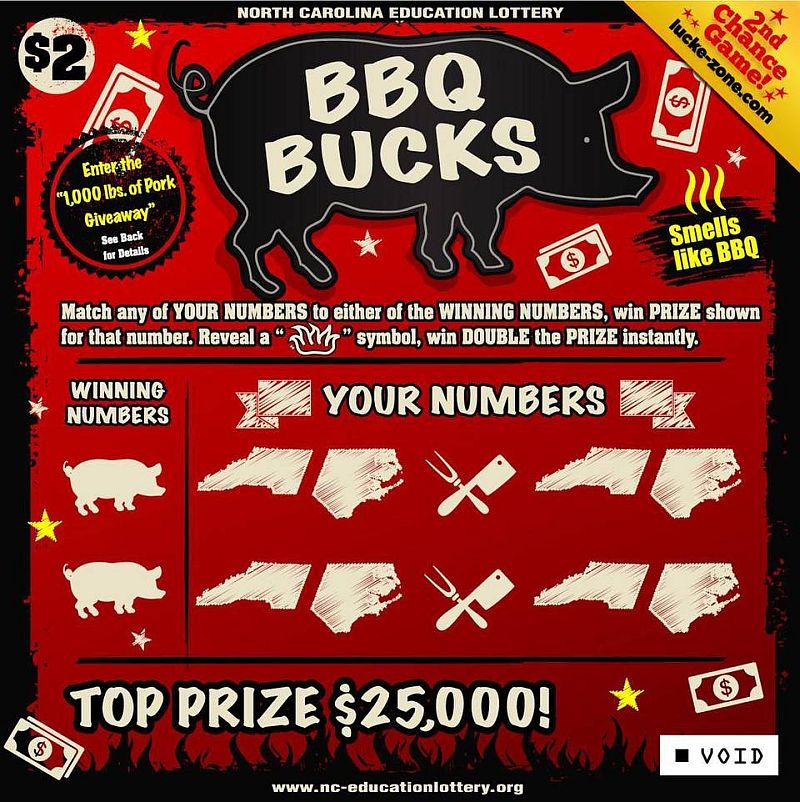