A dedicated lottery player has won a $1 million Powerball prize after playing the same numbers every week for two decades.

Robert Winburn, 49, from Urbandale, Iowa, got his lucky numbers after assigning numbers to the letters of the alphabet and uses the corresponding numbers in his last name as his Powerball numbers.

Previously he had only ever won $100 in one drawing. But his luck changed on Saturday night after he bought a ticket from a gas station.

Winburn matched the first five numbers, but missed the Powerball in Saturday's $330.8 million jackpot drawing to win $1 million. Saturday's winning numbers were 2, 9, 14, 21, and 23, with Powerball number 3. The Power Play number was 3.

No one matched all six numbers that night, so the big prize has climbed to an estimated $400 million annuity ($227.8 million cash option) for Wednesday.

He said he didn't know that he had a $1 million-winning ticket until he scanned his tickets Sunday using a self-checker at an Urbandale grocery store.

"I put the first three (tickets) in and no win," Winburn told lottery employees Tuesday as he claimed his prize at the lottery's headquarters in Des Moines.

"Then (the winning) one came up. I just kind of glanced at it."

Winburn said he scanned his ticket a second time to double-check his luck,.

Winburn doesn't have any big plans to waste his new-found fortune — he said he is going to buy a new car, pay his bills and then invest the rest of his winnings.

Winburn's ticket was one of nine across the country that each won a $1 million prize in Saturday's drawing.

A ticket sold in Texas won a $2 million prize because whoever bought it also added the Power Play option to the purchase.

The nation's biggest lottery prize was a $656 million dollar Mega Millions jackpot in March 2012 that was shared by three winning tickets sold in Kansas, Illinois and Maryland. The second-largest came in December, a $636 million Mega Millions prize.

The two winning tickets were purchased in San Jose, Calif., and Atlanta.

The biggest Powerball jackpot ever was a $590.5 million prize won by a Florida woman last May. 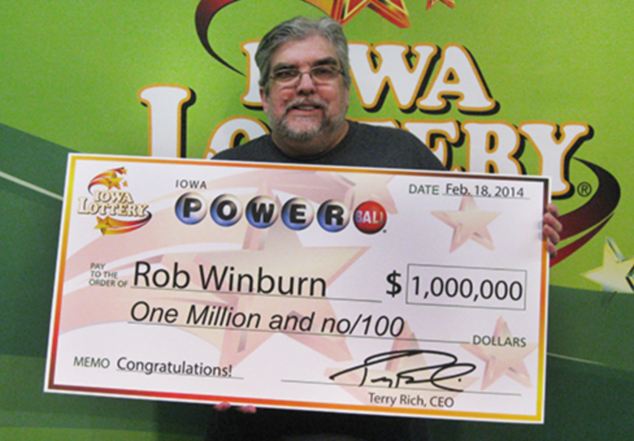 Iowa man drove around with Powerball ticket worth $50K for nearly a yearDec 11, 2020