A Lincoln Park, Michigan, woman who won $1 million in the Michigan Lottery and was later convicted for still collecting state welfare died Saturday from an apparent drug overdose.

Ecorse Police confirmed Saturday afternoon that Amanda Clayton, of Lincoln Park, was found dead at a residence on Sunnyside Street at 9 a.m.

Shortly after winning the lottery in March, Clayton's story garnered national media attention when she revealed she was still collecting $5,500 from the state in food aid and medical benefits .

Clayton, 25, pleaded no contest to fraud in June and was placed on six months' probation in July.

In August, four people were charged with felonious assault outside of Clayton's residence. The dispute, which involved a baseball bat, knife and toy gun, started as a disagreement over grass clippings between Clayton and her neighbor's lawns.

Clayton isn't the only Michigan Lottery winner to become notorious after making headlines.

In August, millionaire Freddie Young, of Detroit, was sentenced to 20 to 35 years in prison for fatally shooting his daughter's landlord.

Young, 64, was convicted on second-degree murder and felony firearm charges in the May 2011 killing of Australian native Gregory McNicol.

Prosecutors said Young won an estimated $1.57 million share of a Michigan Lottery jackpot in February 2011. Three months later, he shot 45-year-old McNicol over $1,000 in back rent owed by his daughter. 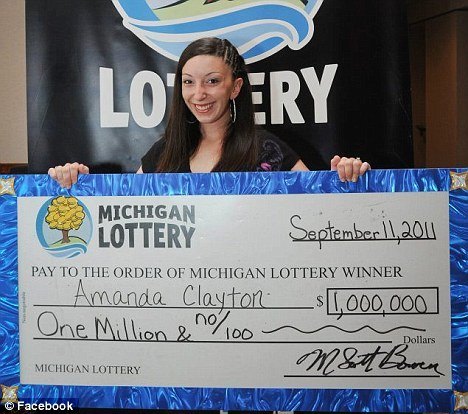