Less than two weeks after a North Carolina community college student smiled for the cameras and cashed in on a winning $1 million lotto ticket, police say it wasn't hers to claim.

"It's honestly just luck," Mikala Fields said as she accepted her prize July 2. "You actually can win."

But luck had nothing to do with it, according to a North Carolina Education Lottery investigation. The Lottery accused Fields of conspiring with her husband, Sean Mewherter, who works at the local Kangaroo Express and is accused of stealing the winning ticket.

Oak Island police have arrested Mewherter and charged him with larceny and possession of stolen goods over $100,000. The charges were announced by the N.C. Education Lottery.

Lottery officials said that after the award was announced, they were contacted by Mewherter's employer, Kangaroo Express in Oak Island, where he allegedly obtained the ticket. An investigation led to the charges and his arrest by police there.

"A lot of safeguards are in place to ensure lottery prizes are honestly won," Alice Garland, executive director of the NCEL, said in a statement Wednesday. "In this case, lottery players didn't get the chance they should have had to win that prize. So when the money is recovered it will be used as prize money in a future instant game."

No charges have been filed against Fields. When she accepted the prize, she opted for the after-tax lump sum, which rounded out to about $408,000. She told the lotto she planned to use the cash to buy a new home, a car and fund her nursing degree. Officials haven't said whether the couple managed to spend any of the cash before police intervened. 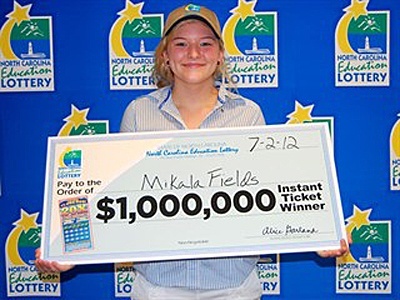 California man learns $10 million reason not to tell your roommate if you win the lotteryJan 9, 2019