Violet Large, who suffered from cancer, died Saturday morning at a hospital in Lower Truro, according to an online obituary posted by a funeral home. She was 79.

Large and her husband of 37 years, Allen Large, cashed in a winning Lotto 649 ticket last summer and collected $11.2 million. They went on to give most of it away to relatives, friends, charities, hospitals, schools, churches and fire halls.

The couple said at the time they were happy with what they had, and that helping others was far better than using the money on themselves.

A funeral service was planned to be held Tuesday. 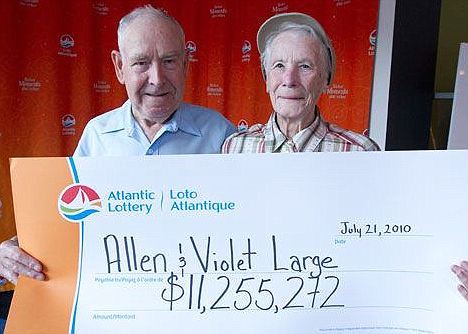 Thanks to AJ for the tip.

Chase the Ace lottery dispute settled between aunt and nephewSep 17, 2018

Hundreds expected at funeral of 'Lotto Angel' who gave away most of $10 million jackpotJun 1, 2018