Postal workers each paid $10 a week into Mega Millions

Perseverance and planning ahead with a storm bearing down on the region paid off for a group of postal worker friends, who came forward Friday to claim their $29 million jackpot.

"We'd been playing for so long, I felt we had to win sooner or later," said Hosea Person, 48. He and 12 others from the priority mail processing center in Romulus had bought Mega Millions tickets for 12 years before hitting it big Feb. 1.

Hosea and his wife, Charlene Person, 48, represented the P1 Gold Lottery Club at a press conference Friday at the Michigan Lottery headquarters in Lansing.

The $93 million Mega Millions jackpot will be split with a winner in Indiana. The Michigan group chose the cash option, which amounts to $29 million and change before taxes. They didn't say how they would split the money.

The winners, all current or retired workers, each chipped in $10 a week to buy 65 tickets for each of the twice-weekly Mega Millions drawings. Hosea Person wouldn't say where the winners live.

Hosea Person bought the tickets for the group and purchased the ones that included the winning combination at a Meijer in Belleville on his way home from work Tuesday.

"I said I'd better buy the tickets on the way home instead of late at night because of the blizzard," he said.

Wednesday morning, he turned on the television to "see how much snow we got," and heard a winning Mega Millions ticket had been sold in Belleville.

"I said (to Charlene), 'We won!'" Hosea Person told reporters.

"We were shouting and screaming and going around the house singing 'We're in the Money,' " Charlene Person said.

The Persons, who have sons ages 16 and 15, don't have plans yet for their share of the jackpot other than to "stimulate the economy," Hosea Person said. Their 16-year-old son has already asked for a car.

According to Lottery officials, other members of the club plan to use some of their winnings on college tuition for children and grandchildren, cars, houses and charities.

None of the winners who are still working plans to quit their jobs, but they will quit playing Mega Millions. Hosea Person joked the group may switch to playing Powerball and try to win that lottery, too. 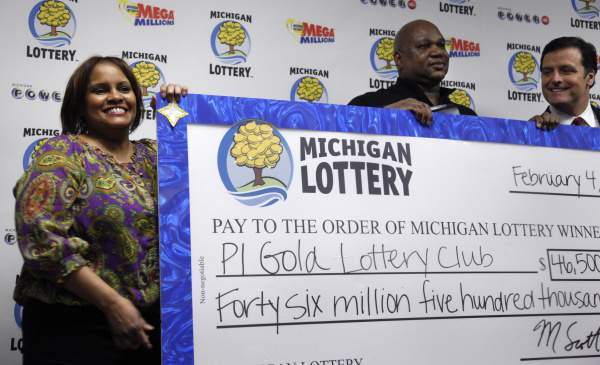