Contrasted to the Arkansas Lottery decision last week to hide their drawings inside a computer, Texas has a model approach

Stephanie Guidry and Mickey Roberts didn't have much else to do, so they stopped in front of the Texas Lottery Commission offices to watch the winning numbers be drawn.

And because she and boyfriend Mickey Roberts had nothing pressing against their schedule from 10:09 to 10:13 on a weeknight, she stayed for the adventure.

Even though they did not purchase a lottery ticket that evening — and aren't even regular players of the games — watching the evening's winning numbers being drawn was something that attracted their attention.

Together on a downtown sidewalk they stood arm-in-arm in the sultry stillness and watched through the studio window as Texas Lottery workers readied the apparatus that would produce "Tonight's winning Lotto numbers!"

She had spied something vaguely familiar. There, about five minutes before the 10:12 drawing, the distinctive blue-and-yellow lottery logo had been projected through the studio glass and onto the sidewalk outside.

Suddenly, a flat screen TV facing the street came alive in a color pattern and the seconds started ticking down to an electronic beep-beep-beep.

Then the exuberant lottery theme music began playing and the dark sidewalk was suddenly bathed in the glare of the too-bright studio lights, like a UFO was landing.

Anybody — lovers, the curious, the passengers in the pedi-cabs, the guy with the pulsating bass in his Mustang, the tipsy, too-cool frat boys in their sports jerseys — can come watch the lottery drawing.

The Texas Lottery offers public viewings from its TV studio on Austin's famous Sixth Street, a Bourbon Street-lite in the self-proclaimed Live Music Capital of the World.

The lottery folks even offer inside seating — 12 chairs separated by a wall of glass from the lotto machines that whirr to life, tossing white bingo balls like movie theater popcorn, each device under the gaze of its own spotlight and studio camera.

Surely — as indicated by the wall-mounted defibrillator in the audience room — this production was meant to rival the anticipatory giddiness of something all-too-quickly answered, like the Kentucky Derby, the New Year's Eve ball drop or Thanksgiving dinner.

Frankly, it would take a large investment in lotto tickets to make it so.

Few stop by for the show anymore, say studio workers, but the live drawings do attract crowds during the year.

"I've been down there on weekends and seen big crowds," said lottery spokesman Bobby Heith. "One big reason is people like to see those balls drop."

The studio is open for street viewing for a simple reason. "It lends to the security and confidence in the games. The public can see that everything is recorded. And they like to see the production," Heith said.

When the Texas Lottery began in 1992, the studio was in a faraway warehouse. It moved to the lottery office headquarters in September 2001.

There was still some excitement. The lottery hired Vanna White types to arrange and smile at the numbered balls as they popped out. Many TV stations carried the drawings live.

But then came a crushing blow in May 2002: The networks claimed the coveted 9:59 p.m. spot, just before the local news.

The lottery drawings had to be moved to 10:12 p.m. but the TV stations were no longer interested in the live shot. A decade had passed and the shiny silver of excitement had been scratched off the ticket.

Even though the crowds have thinned since the live drawings first were held at headquarters in 2001, events in other states in recent years show that lottery players would miss the drawings if they were replaced with a computer.

When the Tennessee Lottery switched from real lottery drawing equipment to a computerized random number generator in 2007, it sparked an outcry that can still be heard to this day.  The lottery players, most of whom had never taken the time to witness a live drawing, were outraged that the option to do so no longer existed.

Their transparent and verifiable — and understandable — lottery drawings were gone in the clink of a keystroke, replaced by a "black box" that decided what the winning tickets would be.

To complicate matters, a simple keystroke error by a staff member rendered every Pick 3 and Pick 4 winning number for the first month of computerized drawings flawed, without any possibility of "doubles" being drawn.

And because nobody can actually see the drawing — it is just a formula executed inside a computer, rather than a mechanical device a human can observe — the error persisted day after day.

After a week, players started to notice that their new computerized drawings were not producing any doubles — combinations in which two numbers are the same, such as 1-1-2.  People started writing to the lottery to alert them that something "did not seem right".

What was the lottery's response?  Those pesky conspiracy-minded lottery nuts!

The lottery insisted that the drawings were fine, and the lack of doubles were just a fluke in the odds.  They even claimed to run numerous tests that verified the legitimacy of the drawings.

But the lottery players were right, and the computers were producing flawed drawings.

Finally, after 23 days and a total of 82 flawed drawings in which nearly half the lottery tickets players purchased were unwinnable, the lottery figured out the problem.

An operator had pressed a "u" instead of an "r" when the games were set up in the computer.

The repercussions of that keystroke were severe and deep, and caused problems beyond those often discussed.

For example, daily lottery players know all about the odds, and because they assumed that the lottery was telling the truth, and that the drawings were fair, they started betting heavily on doubles.  All things being equal, they should have come out sooner or later.

Sales data obtained by Lottery Post showed that players were betting on doubles heavier and heavier each time they failed to show up.  Little did those players know that the heat produced by burning their money would have produced more benefit than buying a lottery ticket containing doubles.

Legislation was proposed to force the lottery to revert to real drawings, but the lottery director scared lawmakers from moving forward with the bill by insisting that bringing back real ball drawings would incur fees of $5 million or more.

Some learn from history, and others are doomed to repeat it.

Despite the warnings, errors, bad PR, and player outcry, some states have converted to computerized drawings, while the Arkansas Lottery last week decided to start off their games using the controversial drawing method.

What will the Texas Lottery do?  What will other traditional ball-drawn states do?

Players continue to show in survey after survey that they overwhelmingly prefer real drawings.  But the companies that operate the state lottery computer systems continue to try and convince lottery executives that computerized drawings are cheaper and easier.

Who will the lottery listen to, the players or the companies?

Who do you think they will listen to? 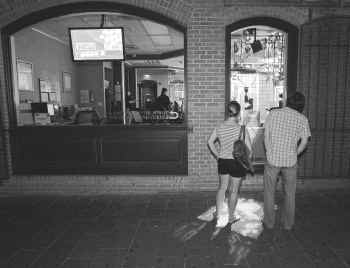 Stephanie Guidry and Mickey Roberts have no doubt as to how the Texas Lottery winning numbers are selected, since they are able to witness the live drawings conducted with real mechanical drawing machines, simply by standing in front of the Texas Lottery Commission offices.