Dreams are now a reality for a lucky Kansas player who dreamed of winning $25,000 and won three times the amount two days later from a Kansas Lottery scratch-off.

Just two days after dreaming that he had won a big prize in the lottery, Mason Krentz of Silver Lake went on to win a $75,000 top prize from the Lottery's "100X" scratch-off game.

Krentz wasn't suddenly inspired to play the lottery from his dream alone. He regularly picks up a few tickets on his way home from work.

Two days after his timely dream, he stopped at the Buy and Ride 7 on SE 15th Street in Topeka and picked out two scratch-off tickets — a "100X" ticket for $10 and a crossword-style ticket.

"I grabbed the '100X' ticket that day because I've won a few times on them already," Krentz told the Lottery. "I didn't think I'd win much on this one because only one number had matched, but then it showed the $75,000!"

Krentz immediately told his family the news of winning the prize right after scratching off the ticket, but for them, seeing was believing. They didn't think it was true until they saw the ticket for themselves.

With the prize money, the winner says he plans on buying a new vehicle for his wife and a plot of land in Silver Lake. The remainder will go to their mutual fund.

"The extra money will be great to have on hand if we decide to build a house eventually," he explained. 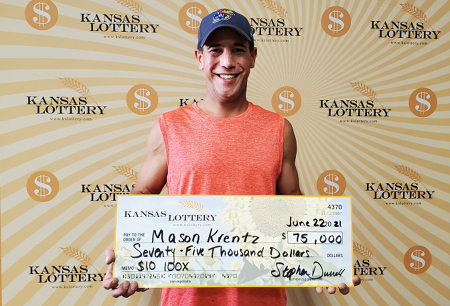 Woman scratches off three winning lottery tickets in a rowApr 16, 2018