A grandmother in Canada's Northwest Territories was stunned by her $55 million (US$40 million) Lotto Max win, but managed to make all the right moves in claiming her prize.

On May 1st, Laura Tutcho had purchased her lottery tickets, but she was not watching for her numbers to come up. It wasn't until her granddaughter alerted her that someone from Yellowknife had won the lottery when she decided to hop on the Internet and check her numbers.

Tutcho recalled being in shock and beside herself after discovering that her numbers matched. She immediately called her grandchildren to tell them the news, and they rushed over to her. Upon seeing her, her grandson asked, "Are you all right, Grandma?"

"I just kept looking at the ticket and looking back at the numbers," she said. "My granddaughter told me, 'The numbers haven't changed, Grandma!'"

Remarkably, these were not her usual numbers. She won the lottery on a $11 quick pick ticket with randomly generated numbers.  The winning ticket was purchased from the Reddi Mart convenience store in Yellowknife.

After an overwhelming week of sitting on the ticket and repeatedly checking the numbers, Tutcho gathered her bearings and sought advice from the Western Canada Lottery Corporation to understand the next steps.

First, she called the lottery for some hypothetical advice without revealing that she was a winner. "What do you do if you won?" she asked.

Their recommendation for Tutcho was that, if she did win, she should take proper steps to secure her own privacy. It would be in her best interest to keep quiet about the win, leave her small town, and head to a larger city. This would also allow her the much-needed opportunity to consult lawyers and financial advisers who would help her prepare for her new status as a millionaire.

After that, Tutcho followed the advice very closely. She asked those who already knew the news to keep quiet until the WCLC made a public announcement about her win. She headed to Calgary, disguising her absence as a fishing trip to a cabin so the rest of her family would not be suspicious. There, she hired a lawyer and an accountant.

In her meeting with the lawyer, she was finally able to relinquish possession of the winning lottery ticket to begin the process of claiming the prize.

"It was a relief," Tutcho recalled.

Once the lawyer officially confirmed with the lottery corporation that Tutcho was indeed the winner of the $55 million jackpot, she endured about a month's worth of meetings with professionals to sort out other financial matters to do with taxes and investments.

Currently, her winnings are invested. She also says that she is on what she called an allowance, citing that "it has something to do with the taxes."

Tutcho finally ended her prolonged absence from Yellowknife to be present for her granddaughter's graduation and her grandson's "farewell ceremony." Upon her return, she entered a mandatory 14-day COVID-19 quarantine required for anyone coming to the Northwest Territories from outside the province.

Since the WCLC publicly announced her win on June 1, phone calls flooded her line, particularly from the media asking for interviews. Of those callers, Tutcho specifically turned down requests from a few Alberta news organizations.

"The first people that are getting interviews are going to be people from the Northwest Territories," she stated.

Tutcho does not plan on spending her money on anything frivolous, rather she wants to use the money to help her immediate family. As a member of the Déline First Nation, she said her only plans are to return to Déline to do some fishing. She dedicated her career to revitalizing the Sahtúgot'i?ne language as a freelance interpreter. 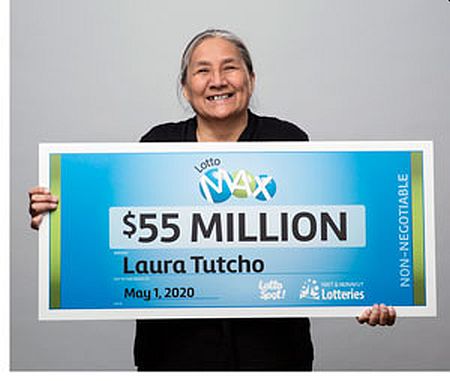