A Nebraska woman carried around the scratch-off lottery ticket for quite a while before she realized she had a $200,000 winner.

Earlier this month, Pamela Beauchamp bought a $20 Ultimate Bonus Crossword scratch ticket from the Nebraska Lottery at a Kwik Stop in North Platte — about an hour's drive from her home in Lemoyne, a village on Lake McConaughy.

After Beauchamp scratched off the ticket, she thought she'd won something — like, maybe, $5,000.

"I kept it in a bag I carried around," Beauchamp told Nebraska Lottery officials when she claimed her prize Friday in Lincoln. "I carried it around for about two weeks."

It wasn't until she checked the ticket at the store that she learned the size of her prize.

She had a hard time believing it. Beauchamp said she plans to give $10,000 to each of her children, and to make a down payment on a house.

The Ultimate Bonus Crossword scratch game offers prizes ranging from $20 to $200,000. The odds of winning the grand prize are 1 in 180,000, according to a Nebraska Lottery press release.

Beauchamp isn't the only Nebraskan to snag a big lottery jackpot. Brent Tuma of Madison claimed $50,000 Friday that he won playing the Gold Hard Cash scratch-off game. He told Nebraska Lottery officials he will use the winnings to buy a truck. 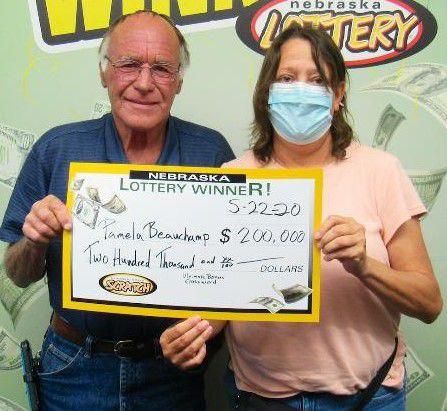 Nebraska woman told her winning lottery ticket is a dudNov 26, 2018