A United Kingdom man who won a £58 million (US$71.6 million) lottery jackpot celebrated by having a beer with his brothers — at a 6-foot distance.

Ryan Hoyle, 38, said he was "shaking" when he got an email informing him he had become a multi-millionaire in Friday's EuroMillions draw.

Hoyle drove to his parents' house, passing his phone through the window for them to "double-check" his numbers.

After confirming the eight-figure bonanza, he enjoyed a drink in the sunshine with his siblings.

Hoyle, of Rochdale, Greater Manchester, said he first thought he had won £2.30 when he saw an email from the National Lottery on Saturday.

When he read the message, he said it "looked like a lot of numbers... I couldn't believe what my eyes were seeing".

He said he was "shaking and really needed a second opinion so... drove round to mum and dad's house".

"I kept a safe distance outside and passed the phone through the window for them to double-check for me."

Hoyle then celebrated while socially distancing with his brothers.

"We kept more than two metres apart. I needed to talk to them... and it really helped with the shock," he said.

Hoyle, who works as a joiner, said he will finish off renovations on his brother's house despite the windfall.

He plans to buy himself a new car, swap his rented one-bedroom flat for a new home, treat himself to a Manchester United season ticket and take his daughter, aged 11, to Florida.

But he said his priority was to help his mother, father and brother "retire this week". 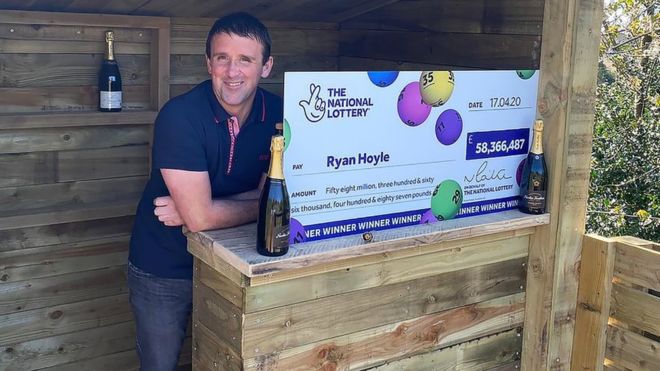