Vilsack won the money playing Powerball in January, when the jackpot climbed to about $347 million before the drawing Jan. 22.

"I forgot about the ticket," Vilsack said in a news release from the Iowa Lottery. "Then I woke up 10 days later, on a Saturday morning, and I said, 'Oh, geez, I wonder how I did?' "

Vilsack served as governor of Iowa from 1999 to 2007. He served as the U.S. secretary of agriculture from 2009 to 2017 in President Barack Obama's administration.

He is CEO of the U.S. Dairy Export Council, whose parent company, the nonprofit Dairy Management, promotes milk and other dairy products.

Ten Dairy Management executives made more than $800,000 each in 2017, even as more than 1,600 dairy farms closed nationwide, according to the Milwaukee Journal Sentinel.

In 2018, Vilsack earned salary and bonuses totaling $930,090, more than quadruple the $200,000 salary he received as a member of President Obama's Cabinet, according to the Journal Sentinel.

Vilsack donated some of the proceeds to St. Boniface Catholic Church in Waukee, split some of the money with his two sons and used the rest to pay down his mortgage, he said. In 2015, he bought a home next door to one of his sons in Waukee.

A friend of his who served on his security team while he served as agriculture secretary was a regular lottery player and won a lottery prize in a similar way, Vilsack said.

"We used to joke about what we'd do (with lottery winnings)," Vilsack said.

Vilsack plays regularly for fun when jackpots get above $250 million.

"I do it primarily because I know it continues to support schools and other educational needs, infrastructure," Vilsack said. "Knowing full well that you're never going to win." 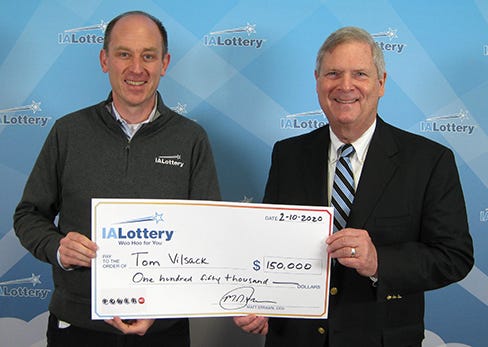 Thanks to TheMeatman2005 for the tip.