A police officer in Wayne, New Jersey, has filed a lawsuit against the department alleging the police chief and other officials sent him to in-patient rehabilitation for a reported gambling addiction when an anonymous caller complained he played scratch-off lottery tickets while in uniform.

In the wide-ranging suit alleging years of corruption within the department, Corporal Rick Vanderclock claims the caller told his supervisors that Vanderclock "was gambling while on duty by and through his purchase of scratch-off lottery tickets."

In May 2018, Wayne Police Chief James Clarke ordered Vanderclock to attend a 30-day in-patient gambling rehabilitation program at his own expense in Florida or face the loss of his job, according to the lawsuit, filed July 10 in Passaic County Superior Court.

Vanderclock said that while he was in rehab, his personal belongings, including medication, were taken from him, he was strip searched, monitored while he slept and subjected to "neurological testing with electrical shocks applied to (his) head."

The treatment was "punitive, harassing, humiliating and discriminatory because he did not and does not have a gambling problem," attorney Ralph P. Ferrara wrote in the suit.

Ferrara claims in court papers that Vanderclock's troubles began in 2017 when he and other members of PBA Local 136 voted that they had no confidence in the police chief's ability to lead the department.

Vanderclock was also disliked by the chief because he had openly supported fellow Officer Erik Ferschman, who was fired for taking an unauthorized meal break in 2015, Ferrara wrote in the suit. Ferschman was later reinstated to his job after taking his case to court.

The suit acknowledges that Vanderclock, an officer in the township since 2003, bought scratch-off lottery tickets with other police officers long before he was sent to gambling rehab. While the Wayne Police Department's policies prohibit illegal gambling, they do not prohibit legal gambling, the suit states.

The suit calls Vanderclock's treatment for a gambling addiction "useless," and claims supervisors unlawfully suspended him for 20 shifts of 12-hours each, refused to allow him to see his personnel file, ridiculed and punished him when he was diagnosed with post-traumatic stress disorder after watching a man burn to death after a traffic crash.

Vanderclock alleges false imprisonment, claiming superiors assigned him to light duty after the PTSD diagnosis and confined to a small room for days on end.

Vanderclock is seeking unspecified punitive and compensatory damages, along with a jury trial. 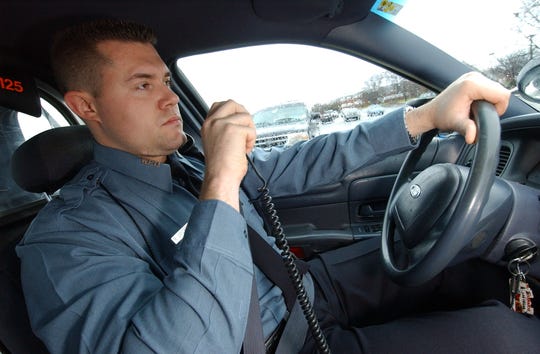