A Canadian woman has become almost $40 million richer, all because she decided to brave the crowds on Boxing Day.

Michelle De Roma of Surrey, British Columbia, purchased the winning ticket to last week's Lotto Max draw during a shopping trip at the Tsawwassen Mills outlet mall on Dec. 26, netting her a whopping $39,517,071.

After learning about her massive windfall, De Roma said the first person she told was "the number one love of my life," her husband. "It's my husband's birthday, so it's the perfect gift for him," she said.

"I told him that we won the jackpot and he just hugged me and kissed me and he shouted, 'Wow!'" she told reporters while claiming her cheque from the B.C. Lottery Corporation Friday.

De Roma plays the lottery about every week and the winning Lotto Max numbers were randomly generated through a quick pick.

The couple waited several days before coming forward, causing some speculation about how long the mysterious winner might wait before cashing in — particularly as a $1 million prize expired after going unclaimed for a year.

De Roma said her three children don't even know about the massive win yet. But now that she's stepped up to receive her prize, De Roma said she's planning to purchase some new real estate for the family.

"I just want a nice house for my kids," she said. "And I want to travel. Everybody wants to travel."

She isn't sure which city they'll be living in, but said she knows at least one far-off and iconic destination she intends to visit.

"I really want to go to Rome — St. Peter's Basilica — with my mother-in-law. She wanted to go there," De Roma said.

She also wants to invest some of the money in real estate. Once De Roma found out she had matched all seven numbers, she put the winning ticket in a safe place.

"I put it in an envelope and put it with other documents," she said. "Important documents! And I already signed it!"

De Roma said she considers the win an "amazing blessing," and had hoped for a miracle whenever she bought lottery tickets.

She plans to continue playing the lottery. 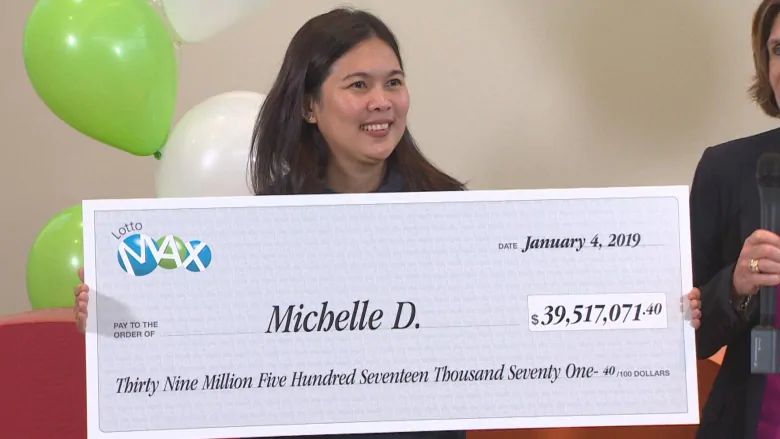 Thanks to ebrockerville for the tip.