"Being a self-employed carpenter, I didn't really have a plan for retirement," Savastano told the New York Lottery in an interview. "The money will help with that.... I'll buy a new truck, pay off some debt and invest for the future."

Just three weeks after he won, Savastano, 51, who grew up on Long Island, died of cancer.

Savastano recently had been diagnosed with stage 4 cancer and "passed away suddenly" on Friday, according to an obituary prepared by the Lester R. Grummons Funeral Home in Oneonta.

A spokesman for the funeral home said Monday that the family did not wish to comment on Savastano's death "at this time."

In his interview with the New York Lottery after Savastano won the Christmas holiday-themed "Merry Millionaire" game on Dec. 9, the resident of Sidney in Delaware County said he was driving home from work when he stopped at a gas station in Masonville.

"I buy scratch-off tickets pretty regularly but I don't normally play the holiday tickets," Savastano said. "I saw the Merry Millionaire ticket and figured, 'Why not?'"

Savastano walked out of the store and scratched the ticket on his way to the car.

"I couldn't believe it!" he said. "I brought it back in and scanned it under the ticket checker and knew it was a winner."

Savastano won on a Saturday but couldn't claim his prize until the Lottery office opened two days later on Monday.

"I kept it under wraps over the weekend, but I did take it out a few times to convince myself it was real," he said.

The $1 million top prize on the Merry Millionaire ticket is paid out as a one-time lump sum payment. Savastano received a net check totaling $661,800 after required withholdings and told the Lottery he had planned to use some of it for retirement.

Savastano was the 97th New York Lottery player to claim a prize totaling $1,000,000 or more this year, the Lottery said.

The funeral home obituary said Savastano is survived by his mother, four brothers and two sisters.

The obituary also said Savastano was born in Queens and had grown up on Long Island but information was not immediately available about specifically where on Long Island Savastano had lived. Voter registration records show he was once registered to vote in Smithtown.

The obituary added Savastano learned carpentry from his father as a child and worked for commercial companies before moving to Sidney 10 years ago where he became self-employed.

"He was known for his high-quality work and perfectionism," the obituary noted. "He always tried to reach out and help those he could by teaching them 'the right way to do things.' "

Visitation will be Tuesday from 6 p.m. to 8 p.m. at the funeral home. Funeral services will be held Wednesday at 10 a.m. at the Oneonta Assembly of God Church in Oneonta. 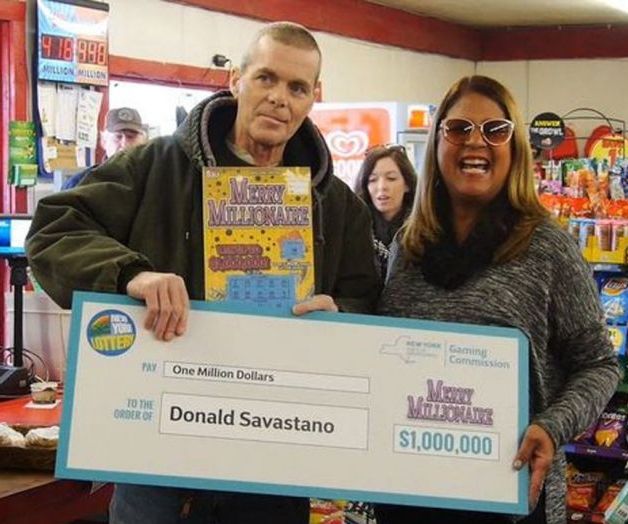