The Georgia Lottery Commission has refused to pay more than $17.1 million in scratch-off game prizes since 2014 — the year lottery officials instituted a policy of investigating big-money winners.

The lottery has issued 270 denial letters to winners of $1,000 or more in the past four years, citing a variety of suspicions that could be fraud: people who claim multiple winning games in a relatively short period of time; winners who can't identify where or when the game was purchased; or individuals who are untruthful about having relationships with store owners who sell the games.

But a handful of lawsuits, challenging million-dollar denials, are testing the agency's ability to withhold prize money without specific evidence of cheating.

The suits claim the lottery's system of investigating winners is discriminatory — that they "interrogate" winners who often have trouble speaking and understanding English, then seize on small discrepancies in the answers to unjustly deny awards.

A review of the denial letters found 63 percent were issued to people of Indian, Asian or Hispanic descent. People with the common last name Patel make up 23 percent of the denials, according to the analysis.

Lottery officials claim there is no inherent discrimination in the procedures, which they say are necessary to maintain fairness for everyone who plays.

"We take each (prize) application as we see it, each application stands on its own merits," said Joe Kim, the lottery's general counsel. "I don't think it's appropriate for anyone to draw conclusions about how we treat ethnic groups based on 270 denial letters.

Kim declined to answer additional questions because of the pending litigation. But in a Nov. 29 deposition for a lawsuit contesting his denial of a $5 million prize, Kim said the agency has five investigators who interview prize winners when suspicions are raised.

He also said the lottery does not provide interpreters during interviews, nor are they recorded. The decision of whether to pay a prize is Kim's alone, although the investigators provide input, according to the deposition.

"I don't consider race, origin, gender, anything" when determining whether to pay a prize, Kim said in the deposition. "I just consider the facts."

Attorneys suing the lottery aren't so sure.

Mark Spix, an attorney who has clashed with Kim and the lottery during his representation of store owners who lease coin-operated slot machines, said the law doesn't support Kim's refusal to pay because of mere suspicion that the person claiming the prize did not buy the game.

Spix also said the lottery needs to provide interpreters and recorded interviews to make sure the questions and answers are clear and documented. He and attorney Jared Lina represent Ramilaben Patel in a suit claiming that a $5 million prize was unjustly withheld.

"The other thing is we think the process needs to be taken away from Joe Kim," Spix said.

The lottery sells more than 60 different scratch-off games, costing from $1 to $30 per ticket.

There is no warning on the games that prizes can be withheld, although the fine print does say that winners are "subject to Lottery rules and applicable state law."

"That was kind of the first step in taking a closer look and doing more investigation of suspicious prize claims."

Clarence Dobson, who listed his address as a post office box in Patterson, Ga., was denied prizes of $1,000 and $5,000 in November 2014. A letter to Dobson said the prize money would not be awarded because he had redeemed 43 tickets over a three-year period, and claimed multiple winning tickets on the same day.

"The extraordinarily improbably win patterns... create a prima facie case that tickets are being given to you by third parties," the letter says.

Sometimes the investigations are more complex. Ankita Patel, of Thomasville, was rejected for a $5,000 prize last year and a $1,000 prize in June. In both cases, the prize was denied because Patel allegedly misrepresented her relationship with the store owner where the game was purchased.

Patel said she lived on Pheasant Ridge in Thomasville, when her license showed an address on Hawks Crest.

A congratulations, then a denial

The denial letters most commonly refer to aspects of the law that prohibit people claiming prize money for others, and requires withholding any money owed to the state when prizes are paid.

Sunitabahen Patel, of Jessup, was denied a $1 million prize in 2014 after she told the lottery her daughter purchased the game as a birthday gift for her on June 7 of that year. Lottery investigators determined that the packet from which the game originated was not made available for purchase until June 14.

The letter written by Kim says Sunitabahen Patel's statement that the game was purchased on June 7 was "fatal to the legitimacy of the purchase of the ticket."

Her lawsuit takes issue with the lottery's process in getting that information out of Sunitabahen Patel, who speaks only Gujarati, one of two dozen major languages spoken in India.

The lottery "did not have a certified Gujarati translator present during the interrogation" and Patel "simply could not understand why she was being questioned repeatedly in a language which she does not understand," the lawsuit says.

Atlanta attorney David Jaffer represents Sunitabahen Patel and said the denial came after the family received a congratulatory letter from the lottery.

"Look at the roller coaster the Georgia Lottery has put these people through: 'Congratulations you've won.' Then, 'Sorry, we're not going to pay you,'" Jaffer said. "These are hard-working folks, and the mental impact has really affected the whole family. The dad nearly went crazy."

Kim said in a deposition that the letter of congratulations, signed by Lottery President Debbie Alford, is a form letter sent before any investigation of the claim.

The lottery used similar reasons for denial of Ramilaben Patel's $5 million prize. Her son, Nil Patel, served as an interpreter during the interview and said the game was purchased June 1, 2016. Kim wrote in the denial letter that the game wasn't delivered to the store until June 7.

The letter also says the Patels both stated that Ramilaben Patel was the only person who ever had possession of the game, but an in-store video at a Kroger in DeKalb County showed one of her sons scanning the game to make sure it was a winner.

"These facts can lead to no conclusion other than that you are cashing the ticket for someone else," Kim wrote in the denial letter.

In the deposition, Kim said he doesn't know who is the real owner of the winning game; he has no evidence proving Patel submitted the ticket for someone else; and that lottery officials have never attempted to determine if Patel or her family members owe money to the state.

Spix said Patel's statements are "mistakes made by the way the lottery goes about trying to reconcile these things."

"I don't really think they believe they can and should deny payment for everyone (who) can't remember from what store they bought the ticket," Spix said. "They're pushing the envelope with their interpretation. We hope these cases will show they can't do that."

Spix and the other attorneys allowed Ramilaben Patel and her son, Rohit, to be photographed, but they would not permit the family to answer questions because of their pending litigation against the lottery.

Jaffer said clear cases of fraud should be prosecuted, but denying prizes based on speculation undermines the lottery's integrity.

"This is a license by the state to... administer the lottery and it carries with it responsibilities," Jaffer said. "When people win, they expect to be paid."

But Kim said in the deposition that there has to be consequence when someone tries to cash in a winning game that doesn't belong to them. Withholding prize money is a logical consequence, he said.

"If people are entitled to a free (chance) to try to get somebody to cash the ticket for them ... that just encourages the attempts to try and circumvent the statute," Kim said. 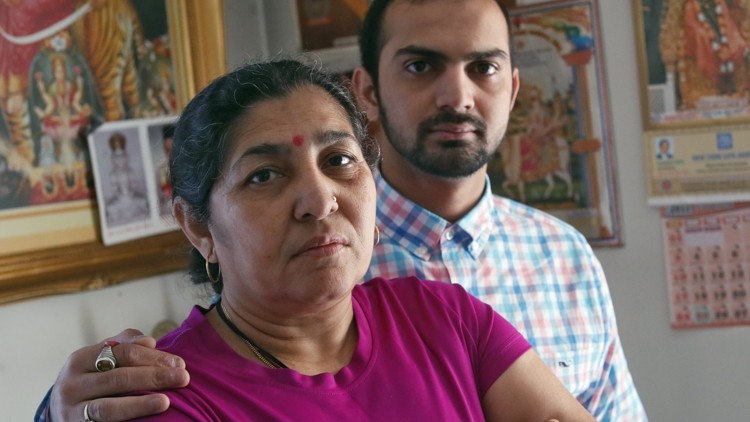