Ripping a page from the 1980s, the Multi-State Lottery Association (MUSL) is starting a new game on Sunday called Lotto America — the original name of what is now known as Powerball.

The throwback name is probably a good idea, since the new game has the difficult task of helping people forget the tumultuous ending to Hot Lotto, the game it replaces.

Fortunately for lottery players, not only does the new game deliver a bevy of appealing game options at a low $1 price point, but unlike the outgoing Hot Lotto game, Lotto America utilizes real lottery ball drawings, boosting players' confidence that the drawings won't be rigged.

Lotto America will feature jackpots that start at $2 million, with drawings on Wednesday and Saturday nights. The new game begins sales Sunday, Nov. 12, and its first drawing will be Nov. 15.

In addition to the jackpot there are eight other lower-tier prizes ranging from $2 up to $20,000.  Plus, a multiplier add-on feature called All Star Bonus can multiply non-jackpot prizes by up to 5 times.  All Star Bonus costs an additional $1 per play.

"As we were researching new game possibilities there was one name that kept coming up, so we decided to go vintage," explained Iowa Lottery CEO Terry Rich. "After 25 years, Lotto America is making a comeback, with new features for today's players."

"Players are looking for something new with exciting prizes. This new game offers a $2 million starting jackpot, at a ticket cost of just a buck," said David Barden, New Mexico Lottery CEO. "Mega Millions moved to $2 on October 28th, so the $1 Lotto America game fills the much-welcomed $1 price point."

Lotto America drawings will be held every Wednesday and Saturday, conducted by the Multi-State Lottery Association after 11 p.m. Eastern Time in Tallahassee, Florida. The drawings will not be televised.

The initial advertised jackpot for the first drawing will be $15 million, as the result of there being no Grand Prize winner in the final Hot Lotto drawing.

All of the 14 states the sold the Hot Lotto game will be participating in Lotto America, although New Hampshire will not begin selling the game until January 2018. The thirteen lotteries that will offer the Lotto America game when sales begin on Sunday are: Delaware, Iowa, Idaho, Kansas, Maine, Minnesota, Montana, North Dakota, New Mexico, Oklahoma, Tennessee, South Dakota and West Virginia.

Jackpot winners will have the option to be paid in annuitized payments over 29 years (30 payments) or as a one-time, lump-sum cash payment.

The complete payout structure is shown below. 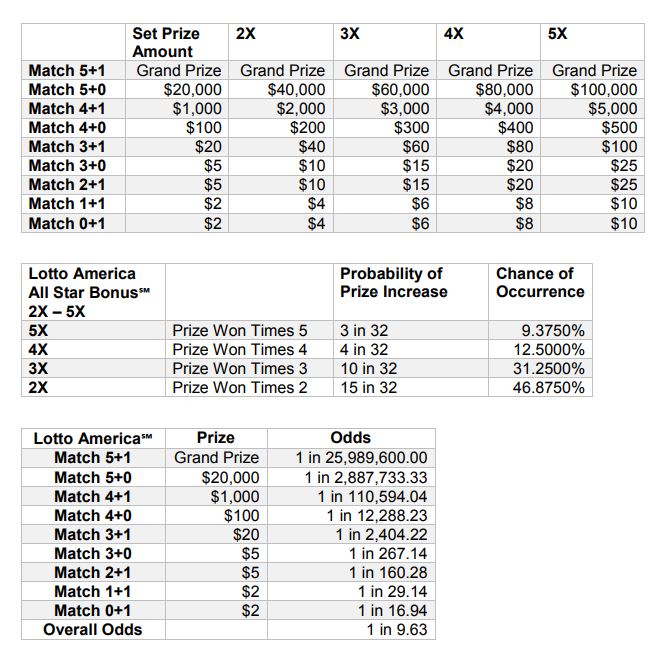 Powerball to increase to three drawings a weekMay 3, 2021