The Kentucky Lottery Corp. board voted Tuesday to approve Gov. Matt Bevin's appointment of Tom Delacenserie as the new president and CEO of the state's lottery.

He has been CEO and secretary of the Florida Lottery since November 2015 and fills a post that has been vacant for nearly a year following the retirement and subsequent unexpected death of longtime Kentucky Lottery CEO Arch Gleason.

Delacenserie is 68 years old and will start work in Kentucky on June 5.  He was raised in the Green Bay, Wisconsin area and said that one of his boyhood heroes was Louisvillian and one-time Packer star Paul Hornung.

In introducing himself after the board approval, he said he had frequently visited Louisville, likes the town and the people and has been especially impressed with the quality of the Kentucky Lottery staff.

Delacenserie, who had a career in the sales industry before joining the Florida Lottery in 2000, worked his way up through the management ranks. He will leave a lottery that typically sees about $6 billion a year in ticket sales.  Kentucky, in contrast, may reach $1 billion in sales for the first time this fiscal year.

But the new CEO said he sees a challenge in building on Gleason's legacy and in returning more dollars to the state general fund so more youth can benefit from scholarships provided by the lottery revenue returned to the state coffers.

Delacenserie said in answer to media questions that he believes he can grow Kentucky Lottery sales, perhaps through expanding the base of retailers and by improving the ticket distribution network.

He said his emphasis will be on increasing both sales and proceeds to the commonwealth.

"I'm committed to providing exciting products and winning experiences to our retailers and lottery players," he said. "At the end of the day, our work sends kids to college. They're depending on us."

The lottery board on Tuesday also authorized its top directors to negotiate an employment contract with Delacenserie, who was appointed to head the Florida Lottery about 18 months ago by Florida Gov. Rick Scott.   Delacenserie said his current salary is $141,000 a year. Gleason was making almost $250,000 a year.

Under his leadership, the Florida Lottery has set sales records year after year.  Last fiscal year was the 14th consecutive year that the state's lottery has transferred more than $1 billion to a state educational enhancement trust fund.

According to Florida media accounts, Delacenserie resigned his Florida job last week, effective June 2.  In February, the Florida House of Representatives filed suit against the lottery, contending that it had illegally signed a long-term contract with a ticket vendor – and in the process would be spending more money than state legislators had budgeted.

Kentucky Lottery chairman Mark Sommer said Tuesday that more than 800 candidates had applied for the job.  He said the board interviewed several finalists and forwarded the names of three top prospects to Bevin, without ranking them.

Sommer said that "the search has been both significant and detailed, and we're pleased with the overwhelming interest in the position."

The board hired a Louisville-based, executive-search firm, The Oliver Group, to help find a new chief executive officer.

Gleason died in July, following complications from injuries sustained in a fall — just days after he announced his retirement.  He spent nearly 23 years at the helm of the Kentucky Lottery, serving under five governors. He was the longest-serving state lottery director in the country. Delasenserie said he knew Gleason well.

The CEO reports to the Kentucky Lottery board, whose members are appointed by the governor. The lottery has a staff of just over 150 and an annual operating budget of around $32 million — with the budget funded out of lottery sales income.

Marty Gibbs, the lottery's chief operating officer, has been serving as interim staff director. Sommer said she will return to her post as lottery COO.

Prior to his career in state government, Delacenserie had a long career in the private sector, working primarily at consumer-products companies and focusing on retail sales.

He and his wife of more than 40 years, Mary Anne, currently live in Tallahassee and have three daughters and two granddaughters. 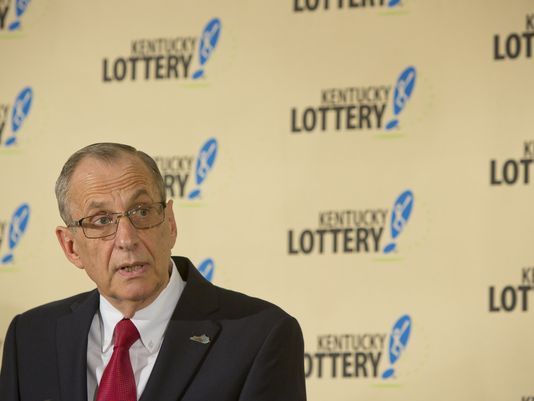