Half of all Americans play the lottery

Roughly half of Americans say they have bought a state lottery ticket within the last year, similar to the figures recorded in 2003 and 2007, but down considerably from the 57% who said they played the state lottery in 1996 and 1999. This trend has occurred even as the number of states with lotteries grew over this period from 37 states and the District of Columbia to 44.

These latest data are from a Gallup survey conducted June 14-23. The exact reason for the decline in Americans' reports of playing the lottery during the last 13 years is not clear, although gamblers now also have a wider range of gambling avenues from which to choose, including the proliferation of online poker and online fantasy sports leagues, according to Gallup.

Critics of state-sponsored lotteries argue that they disproportionately prey on the hopes of disadvantaged groups such as the poor and less educated, who can least afford to be spending on non-essentials. According to some lottery critics, lottery winnings can have an outsized appeal to economically vulnerable Americans who have less disposable income.

There are also modest differences by education. Less than half of Americans (47%) with a high-school diploma or less say they have purchased a state lottery ticket — on par with those with postgraduate education (45%). However, more than half of Americans with some college, as well as those whose highest education is a college degree, say they have bought a state lottery ticket (53% each).

Nearly two-thirds of Americans gamble in some fashion

Playing a state lottery is the most popular of 11 common gambling activities measured in Gallup's latest update on gambling behavior, with barely a quarter of Americans reporting engaging in the second-most-popular mode of gambling — visiting a casino (26%). Other than participating in a sports-related office pool (15%), no more than one in 10 Americans say they participated in each of the other types of gambling tested within the past year, including wagering on professional sports events (10%) or playing video poker (9%).

Gambling does not appear to represent a major problem for Americans. Fewer than one in 10 (7%) say they sometimes gamble more than they should, and an identical 7% say gambling has at some point been a source of problems in their family. There has been little change in responses to these two questions over the years.

In a year marked by a record lottery jackpot in excess of $1 billion, many states are seeing increased revenues from lottery ticket sales. In fact, Massachusetts' state treasurer announced this week that the state saw record highs for both lottery sales and profits in the last fiscal year, selling $5.23 billion in lottery tickets. These trends are occurring despite little evidence of an increase in the percentage of the adult population who play the lottery in recent years.

Many states' lottery revenue supports dedicated policy funds, such as education (for example, Florida), environmental protection (Colorado) or assistance to the elderly (Pennsylvania). By tying revenues to support of public goods, states position their lotteries as a means to supplement popular policies. The role of the lottery remains controversial in some quarters, however. The nonprofit North Carolina Center for Public Policy Research has found that rather than supplementing the budgets of programs for which lottery revenues are dedicated, some states use lottery revenues to fund those programs at normal levels, and then move government funds to other budget items.

Whatever the big-picture consequences of state lotteries, about half of Americans find playing the lottery rewarding enough on a personal basis that they buy a ticket — at least occasionally.

Results for this Gallup poll are based on telephone interviews conducted June 14-23, 2016, with a random sample of 1,025 adults, aged 18 and older, living in all 50 U.S. states and the District of Columbia. For results based on the total sample of national adults, the margin of sampling error is ±4 percentage points at the 95% confidence level. All reported margins of sampling error include computed design effects for weighting. 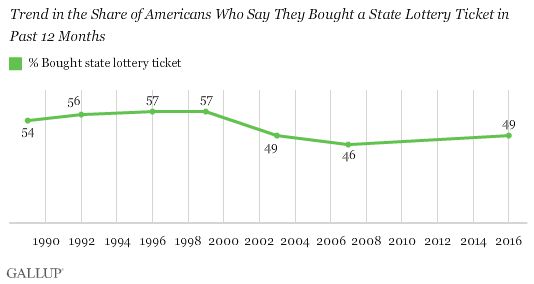 It turns out money can kind of buy happiness after allSep 30, 2019

Survey: Many investors would make questionable decisions after winning the lotteryDec 19, 2017

In lotteries, lucky numbers will only win you lessOct 9, 2015

Lottery leaders convene in D.C. to discuss future of gamesApr 26, 2012