A San Diego resident kicked off his birthday by winning over a half-million dollars in the Fantasy 5 lottery, and had to step outside of a dinner gathering to double-check his ticket in disbelief.

Sean Zanderson from Encinitas realized he won when his ticket matched five numbers out of 36 for the May 1 Fantasy Five drawing, winning $543,579. California Lottery officials say this is the largest Fantasy 5 prize that any lottery players have won this year in California.

"I was out with my girlfriend and friends at dinner when I checked my phone with my ticket and realized I had won," said Zanderson. "I had to step outside for a minute to double-check. I couldn't believe it!"

It wasn't the only reason to celebrate, as Zanderson discovered his good fortune just a few days after his 37th birthday on April 29.

This new lottery winner bought his lucky ticket at the Vons Grocery store at 453 Santa Fe Drive in Encinitas, said Lottery Officials. Zanderson was buying deodorant when he also purchased $20 worth of California Lottery tickets.

When he learned about winning the lottery while out to dinner, it was great timing to share his excitement with his friends and girlfriend.

"My girlfriend had just paid the bill, but I bought a round of drinks after I told everyone," said Zanderson.

According to lottery officials, Zanderson will use the money for a down payment on a house.

He also plans to take a vacation and have a night out on the town. It looks like he'll be picking up the check this time. 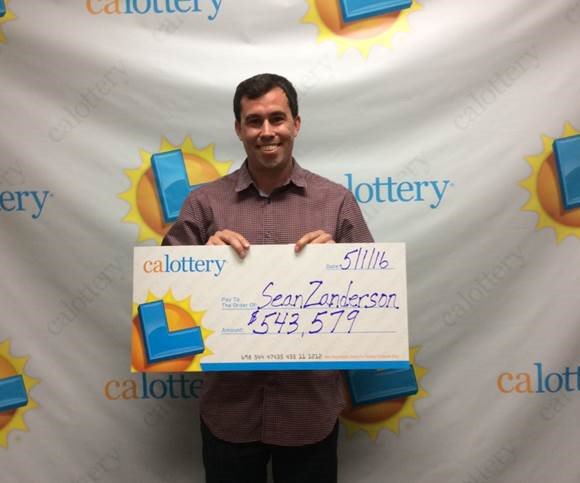 NC man can reopen business shuttered by COVID-19 thanks to $1.2 million lottery prizeOct 4, 2020