A West Hollywood, California, man who won $1 million playing Powerball recently told California lottery officials that he might not have bought the ticket had it not been for an encounter with an online psychic.

Kevin Millard matched five out of six numbers in the Powerball draw on Sept. 19, winning a total prize of $1,009,368, the state lottery said in a news release on Friday.

Although he regularly played the lottery at one time, Millard had recently scaled back, except when it came to larger jackpots. But that weekend's jackpot — worth an estimated $208 million — wasn't enough to initially entice the 54-year-old man to play.

He explained, however, that his intuition to buy the tickets was ultimately the result of interacting with an online psychic, the release stated. Millard subsequently chose to abandon her once his free-trial ran out, according to the release.

"I said, 'Forget it. You just want money now,'" Millard recalled to lottery officials. "She would hit me periodically with messages saying 'Your money's coming. This year is a change for you.'"

While mulling over the decision to buy tickets for last weekend's game, he said the psychic's messages flashed through his mind.

"I thought, 'I gotta play a lottery ticket. Maybe she's right,'" Millard said in the release.

He ended up buying 10 Powerball tickets at Golden Rule Liquor, which is located at 7753 Santa Monica Blvd. in Los Angeles, according to officials.  It was the first time he had even been to the store.

One of the tickets matched five numbers, missing only the Powerball.

With no tickets matching all six numbers, the Powerball jackpot was expected to climb to an estimated $267 million for Saturday's drawing, according to the release.

Millard's run-in with a psychic might have led him to this point, but he's going to trust his own judgment when it comes to his winnings. "I'm moving forward, moving on," Millard said. "I don't want to squander it."

Because of his job with a property management company, Millard explained that he already has a place to live. Any real estate he might buy now would serve as an investment. "And use that money to work for me for the rest of my life," Millard said, as if predicting the future. 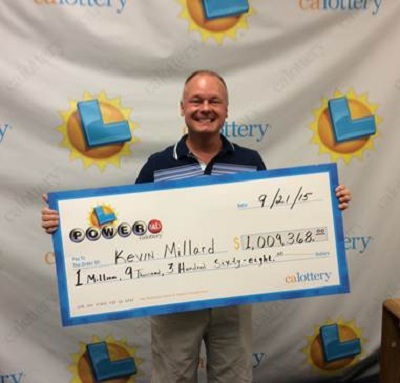 Thanks to truesee for the tip.