When Stephen Harrod checked his Hot Lotto ticket in the early morning on July 2nd to find out the prize amount, the convenience store clerk couldn't believe her eyes.

"She scanned (the ticket) and she went 'oh my,'" Harrod said as he recounted the story later that afternoon at the Kansas Lottery headquarters, 128 N. Kansas Ave. "She got her glasses and wrote it down on a piece of paper and gave it to me. I said, 'no way.' "

The computer showed Harrod had hit the $9.85 million Hot Lotto jackpot in Wednesday night's drawing. His ticket, purchased at Tripco Enterprises in Severy, matched all the numbers: 17, 23, 29, 30, and 33, with Hot Ball number 15.

When Stephen Harrod called his wife, Tana, to tell her the news, she didn't believe him, she said. He told her he would call the Kansas Lottery at 8 a.m. and make sure.

The Harrods, who live in Elk County outside of Piedmont, said they don't currently have grandiose plans for the $9.85 million, on which the lottery pays the taxes on the winners' behalf. Tana Harrod said she has requested a new vehicle and a new lawn mower, but aside from that, they plan to use the money for investments and college funds. The couple has five children and four grandchildren.

Sally Lunsford, spokeswoman for the Lottery, said the Harrods each work multiple jobs. The couple said they will be cutting back on their work hours.

"You're real level-headed folks, and we know you'll make good use of it," Lunsford told the Harrods, "and we're so happy for you."

Stephen Harrod always purchases a "fast five," Lunsford said — a $6 ticket that includes Powerball, Mega Millions, 2x2 and Super Kansas Cash, as well as Hot Lotto. Harrod said he has been playing steadily for the past couple of years. Although he doesn't plan on winning again, Harrod said, he will keep playing.

The $9.85 million jackpot is the sixth Hot Lotto jackpot won in Kansas since Kansas joined the game in September 2006, Lunsford said. 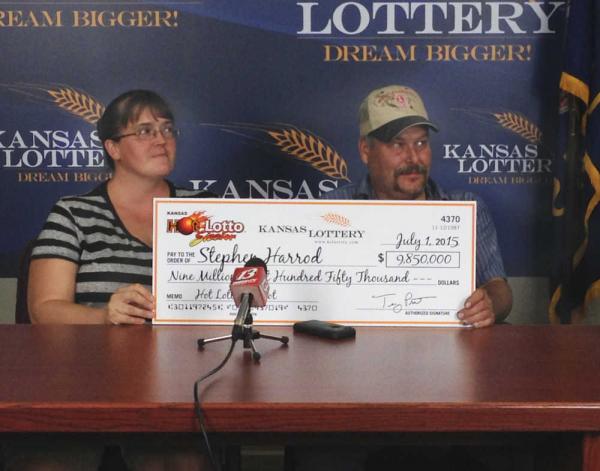 Thanks to DELotteryPlyr for the tip.