Christmas came a few weeks early for 101-year-old Lily Camacho, who lives in the central Arizona mining town of Kearny. On Tuesday, she won the grand prize of $50,000 in the Arizona Lottery's Money Tree game.

Fortunately, she also has a 78-year-old son who buys her the occasional scratch-off ticket.

Not that any of them ever paid off — until last week.

As he does a few times a week, Eusebio Camacho bought a handful of various scratcher-game lottery tickets, including a $5 Money Tree ticket. He said he doesn't know why he decided to buy a ticket for that game, because neither he nor Lily had won anything playing it in the past.

"The Lord just told me to buy that ticket," he said.

When Lily saw the ticket, he said, she asked if she could play it. Eusebio handed it to his mother. When he returned a couple of hours later, she asked him to take a look at it.

"It turned out to be a winner," he said.

The odds of scratching the big winner in that game are one in 240,000.

"We could not have been happier to award Lily Camacho with her $50,000 top prize check," said Karen Bach, director of budget, products and communications for the Arizona Lottery. "At 101 years old, she is one of the oldest Arizona Lottery winners we have had the pleasure of meeting and hope this win brings joy to her and her family this holiday season."

protective of their matriarch. Eusebio said his mother told her story at the lottery headquarters when she turned in the winning ticket, accompanied by five family members, and figures that's enough talking.

Eusebio said he couldn't reveal what she plans to do with the money, but said she will continue with her normal routine. That includes tuning in when the Diamondbacks return to the field.

"She's been a big fan since the year they won the World Series," he said. "She hardly ever watches TV, but she watches them. She really looks forward to every game."

She also joins Eusebio about once a month on a trip to San Carlos, just outside of Globe.

"She likes to go to the Apache Gold Casino," he said. 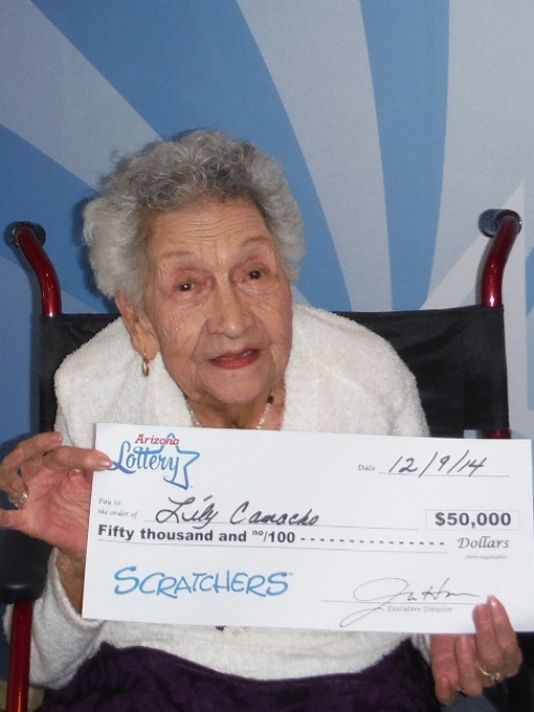