The New Jersey Lottery had the honor of crowning the first in the nation, Top Prize winner of the Monopoly Millionaires' Club draw game.

Wayne O'Keefe is the winner of the $21 million annuity prize from the Nov. 7th Monopoly Millionaires' Club lottery game drawing. O'Keefe matched all five numbers 01, 09, 11, 12, and 27 plus one Property Number-18 (B&O Railroad), to win the prize.

O'Keefe purchased his ticket opting for the cash option and will receive $12,804,878 before taxes.

Carole Hedinger, Executive Director, New Jersey Lottery said, "The Monopoly game properties are all streets in Atlantic City so it seems fitting that New Jersey has the first Top Prize win in the nation. We are pleased that a New Jersey resident is benefiting from the life-changing prize. In addition, institutions and organizations across the state benefit from lottery revenue generated from the ticket sales of all our games."

Mr. O'Keefe, 65-years old and a veteran of two tours of duty in Vietnam, arrived at headquarters accompanied by his wife of 37 years, Stacie and son Wayne Jr., 22 years old. Wayne expressed pride for his son who is a member of the Army National Guard and for his service to the community during Hurricane Irene and its aftermath. Wayne also thanked all of the men and women of the armed services for their duty.

The O'Keefe Family believes that is was Stacie's mother, who passed away on Oct. 30 at the age of 91, who is their lottery angel making this life-changing win possible. It was the day of the memorial service that Wayne checked his lottery ticket on the self-check Ticket Scanner. The message read, "Claim Winner, Please see clerk," the meaning of which was a bit unclear for Wayne and the store owner. It wasn't until the following day that the O'Keefe's learned the true
value of their lottery win.

With gratitude for the care of Wayne's father, the O'Keefe family will be making a contribution in support of the New Jersey Fireman's Home. To honor of the memory of Stacie's mother, and in gratitude for the care she received from the Karen Ann Quinlan Hospice, they will be making a contribution to the Karen Ann Quinlan Memorial Foundation.

Each week the Top Prize is not won, the number of $1 million prizes increases.

Players will also have a shot at a $1 million prize on the upcoming Monopoly Millionaires' Club TV show, which will debut in February. The show will feature an
audience of players who have been randomly selected after completing Monopoly-themed Property Sets by entering codes from their tickets on www.playmmc.com.

Selected players will be flown to Las Vegas where the show will be taped, and will receive a five-day, four-night stay for two plus spending money at the Planet Hollywood Resort and Casino. Billy Gardell, star of Mike and Molly and Me, You and Dupree, will serve as the host of the show. 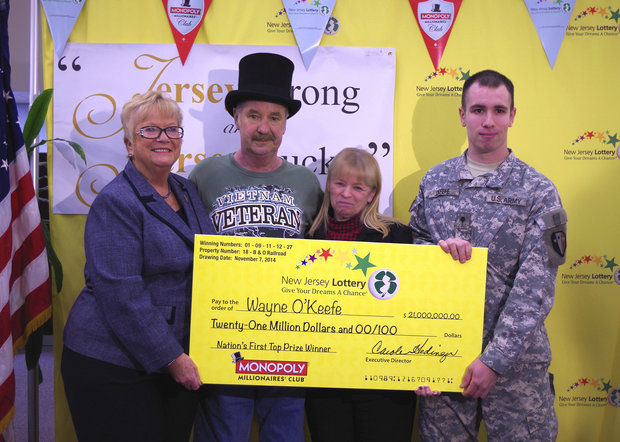