For many years, as state revenue has fluctuated and stagnated, the Missouri Lottery has been a welcome outlier, a dependable, sometimes surging revenue stream that rarely failed to post record profits.

From 2001-2008, the lottery doubled its sales, to just shy of $1 billion, and its contribution to state education funding (where its profit is directed) reached $265 million.

Since then though, the pace has slowed. While sales have continued to tick upward, gone are the years of double-digit growth, when the introduction of new games and prizes seemed to consistently push the lottery to new heights.

For the 2014 fiscal year, which ended June 30, the lottery's unaudited sales — $1.143 billion — would nominally represent yet another high mark. But what really matters to the lottery is profit after administrative costs, retailer commissions and prize payouts. That fell more than $21 million from 2013, was $31 million short of the lottery's $298.6 million goal and was below its 2006 total if adjusted for inflation.

Gov. Jay Nixon, in withholding $35 million in education funding, cited declining lottery and casino revenue as part of his decision, though general revenue also fell well below the state's expectations.

With the miserable winter experienced by much of the country, this has been a tough year for many lotteries. "If you can't get out of your house, you can't buy lottery tickets," said Gary Gonder, the lottery's chief operating officer.

Gonder also blamed a lack of major jackpots for some draw games — particularly the lottery's most profitable game, Powerball — for failing to entice consumers to buy tickets as they typically would. "That's all luck," he said. "Lotteries have no control over jackpots."

Sales of the more predictable scratchers tickets, which have grown to account for two-thirds of sales, rose by 1.2 percent.

Regardless of weather or jackpots, steady growth has always been a challenge for state lotteries as they age. The Missouri Lottery was launched in 1986.

"It follows a life cycle like any product," said Thomas Garrett, a University of Mississippi economist who studies lotteries. "You get this increase in sales. It peaks. People get used to it, and then you get this slowdown."

Gonder said, "That's a challenge to lotteries: How do we overcome fatigue?"

While the recession hasn't helped, it's difficult to pinpoint whether sluggish sales are an effect of a sleepy recovery, Garrett said, "or if there's something structural going on with people's interest in gaming."

Looking to the future

Gonder said Missouri is particularly focused on capturing the attention of the so-called millennial generation.

Getting younger adults to incorporate lottery tickets into their purchasing habits isn't a challenge just in Missouri. In Canada, an aging player base has led to talk of creating a new national lottery specifically targeting people under the age of 35.

There is also a concern that millennials are less interested in gambling than older generations. In Las Vegas, younger visitors have been gambling less and spending more on clubs.

At a BP station on Hampton Avenue in south St. Louis, manager Daniel Teklenkiel said he has plenty of regulars who come in for tickets, but he noted that few of them are in their 20s. "I do get them," he said, "but not at a high rate."

To thrive in the future, the lottery will need to hook more people like Andrew Fotopulos, 21, a St. Louis University senior who started buying scratchers tickets after he turned 18. Fotopulos likes the suspense of the $3 games he plays each week, though he's unwilling to buy higher-priced tickets, the most expensive of which are $20.

He has friends who also play but said when he looks around at other lottery customers when he's at a gas station near campus, most of them aren't college students. "I see older people," he said, "and they're usually buying the more expensive" games.

To draw younger players, Gonder said, the lottery is creating more prizes other than cash, such as shopping sprees or trips to the Grammys or to California for the live after-show of "The Walking Dead."

The lottery is also concentrating more of its expanded advertising budget (now at $16 million) on "philanthropic branding" by highlighting its contribution to education. Younger people "like to be associated with brands that have a cause, that do good things," Gonder said.

Missouri isn't considering online sales, which are now occurring in Georgia and Illinois, but Gonder said that "the industry has to move in that direction."

The lottery also continues to come up with new games and themes. Last year, it created Ghostbusters and Duck Dynasty-themed scratch-off tickets, and it hopes to have a Mizzou ticket. "Florida did a Florida State and Florida Gator ticket," Gonder said. "It sold like crazy."

To prolong the life of each ticket, the lottery now has a reward program that issues points people can use to enter drawings or to shop online.

Beyond marketing, the lottery, which has nearly 5,000 retailers statewide, is experimenting with ways to make it even easier to play.

It's testing two pilot programs where players can buy Powerball and Mega Millions tickets at ATMs and gas pumps. Tickets are available at 100 ATMs in Kansas City and St. Louis, and at 37 gas stations around the state.

While the lottery hasn't yet advertised the programs, which are just a few months old, sales have been growing slowly. As of June, the combined sales for the programs were averaging $5,358 a week.

"We thought we'd have more retail locations at this point," Gonder said, noting that the program didn't cost the lottery any money.

Gonder appeared more excited about a new multistate game that might launch in the fall. The game would cost $5, more than Powerball or Mega Millions, and would produce multiple million-plus prizes, instead of just one primary jackpot.

In its push for more sales over the years, the lottery has added more expensive games with higher expected returns to players, resulting in an increased prize payout. This means a lesser share of sales are passed on to education programs. Around 2000, roughly 30 cents of every dollar spent on lottery tickets went toward education. That figure has gradually declined. In 2014, a record-low 23.4 percent of sales (according to unaudited figures) went to education, and more than 70 percent went to prizes.

Gonder said a sharp jump in prize payouts last year was not intended; it resulted from poor sales of high-profit games such as Powerball.

In its hunt for more profits, the lottery is often chasing lofty goals set by lawmakers, who are now betting it can help fund items beyond education. In the spring, the Legislature overwhelmingly passed a measure that, subject to voter approval in August, would create a new scratch-off ticket that would raise money for the Missouri Veterans Commission capital improvement fund.

Some lawmakers are uneasy about the reliance on gambling revenue to fund state programs. Sen. Rob Schaaf, R-St. Joseph, was worried a veterans ticket would take money away from education proceeds, and also questioned whether it was a good idea for the Legislature to give the lottery more money for advertising last year.

"If it's true that the more you spend the more you get, all along the curve," he said, "then it probably makes sense to spend as much as you can."

But if that isn't happening, Schaaf said, "you're just taking money from education and putting it into advertising."

Gonder said the extra money, most going to TV ads, will help boost sales. Missouri's lottery has done well despite spending less on advertising and having fewer employees than other states, he said.

"I think there's a certain level of deception about encouraging people (to gamble) that I'm uncomfortable with, even if it produces revenue," said outgoing state Rep. Chris Kelly, D-Columbia.

Kelly said his vote in the 1980s to create a lottery was one of the worst he had ever cast, but he acknowledged Missouri's reliance on the lottery isn't going away anytime soon.

"We have to continue with it for all practical purposes," he said. "And we should see what we can do without encouraging inappropriate gambling or being deceptive." 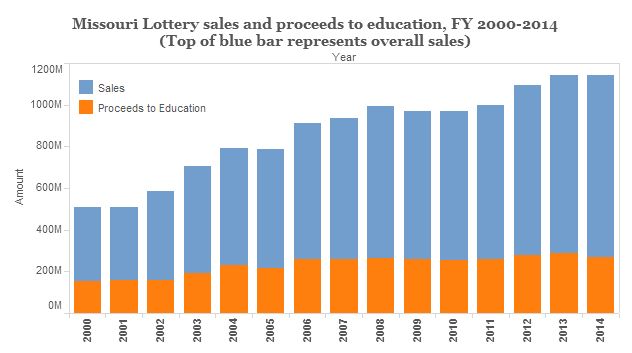 Thanks to Coin Toss for the tip.