"Kiss your bride!" Janet Dalby instructed her husband Richard, as the two posed with an oversized $4 million check from Virginia Lottery on Friday.

The couple was celebrating their newfound wealth, made possible by lucky scratch-off winnings at Taylor's Market, where Richard Dalby purchased the winning ticket two days earlier.

The Dalby's have been buying lottery tickets at Taylor's Market on U.S. 1 for the past 20 years.

Richard Dalby is retired, but Janet still works as an IT director for a small company.

Having won $10,000 once before from a market scratch-off, the Dalby's were no strangers to Virginia Lottery, but their excitement was unrestrained.

When Richard Dalby purchased the ticket, he first thought he had won $100,000, but soon realized it was a lot more.

He couldn't stop shaking, but eventually was able to call his wife and begin spreading the news to their family.

"No one believed it," Janet Dalby said.

The couple has two children who were also at the market on Friday, Ashlea MacLaird and Kelli Holton, who were born and raised in Stafford.

Their plans for the money include a college fund for Holton's 1-month-old son, Brentley.

Their plans also include paying off their mortgage and saving money in a retirement fund.

"We're going to tie that money up so tight so we can enjoy it for the rest of our lives," Janet Dalby said.

However, after they received their check and signed the paperwork at Taylor's Market, their next stop would be the car dealership to buy a new car.

"It's going to be big, whatever it is," Janet Dalby said.

The couple, who have been married for 35 years, praised the Virginia Lottery for their customer service and hospitality.

The $4 Million Mega Multiplier, the $20 ticket Richard Dalby won with, features prizes ranging from $20 up to $4 million, and the Dalbys found the first of four top-prize tickets.

Richard Dalby's answer when asked if he would continue to the play the lottery? 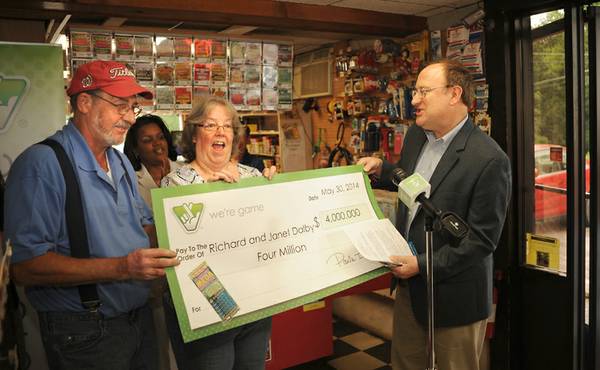 Thanks to hearsetrax for the tip.