To date, the Dallas Cowboys scratch-off game has resulted in $184 million in sales with $125 million in prizes awarded to winners.

Players who do not win instantly can enter their tickets into any of the five promotional second-chance drawings to be held throughout the run of the game.

"We always look forward to the start of football season and to joining forces with the Dallas Cowboys to offer this exciting game," said Texas Lottery Commission Executive Director Gary Grief. "The promotional second-chance drawings provide a unique playing experience and the opportunity to win once-in-a-lifetime opportunities."

More than 1,000 prizes will be awarded in each of the second-chance drawings. Prizes include:

"We are thrilled to be moving into our fifth year as partners with the Texas Lottery," said Jerry Jones, Owner and General Manager of the Dallas Cowboys. "Over the past four years, I have been able to witness the excitement our fans enjoy from experiencing many of the one-of-a-kind second-chance drawing prizes. It is very satisfying to know this partnership has also contributed millions of dollars to funding the education of the youth of Texas." 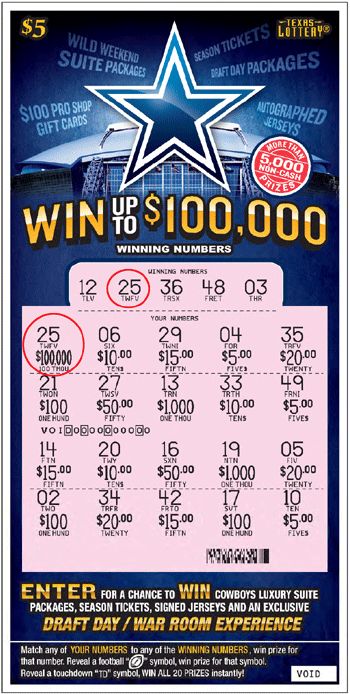 Maryland Lottery and Baltimore Ravens team for another scratch gameJun 16, 2010