Tara Ramirez doesn't know what she's going to do after claiming a $70 million Powerball jackpot.

But with an eight-figure nest egg, the Hartsdale woman can do just about anything she wants.

Ramirez, 37, was presented a ceremonial check for the top prize in the multi-state lottery game Thursday at Dairydel on South Central Avenue in the Hartsdale section of Greenburgh, New York. On Feb. 24, she visited the store and played the winning numbers: 6, 11, 42, 53, 54 and the Powerball number 7.

She was one of a pair of Westchester lottery winners presented checks: Robert Rice of New Rochelle won $3 million in the Triple Million scratch-off game.

"I'm in shock. I feel amazing, excited," Ramirez said Thursday, smiling broadly and holding the giant eight-figure check. "I never would have believed this would happen. I mean, what are the odds?"

The odds of winning a jackpot are one in 175 million for a $2 ticket purchase. Ramirez spent $8 on Powerball tickets and $2 on Mega Millions tickets.

Champagne wishes and caviar dreams haven't started flowing yet for Ramirez, an education consultant who said she has lived in Greenburgh for just a few years. Beyond paying bills and taking care of family, she said she hasn't planned much and will continue working.

"We haven't quite gotten to what specifically we're going to do," said Ramirez, whose husband was not at the news conference. "We're just trying to maintain normalcy and stay grounded and just keep moving forward."

Ramirez, who said she plays the lottery infrequently, accepted a one-lump-sum payment of $43.7 million on behalf of Case Park, LLC, a corporation she was advised to form after winning the prize. After taxes she will net nearly $29 million.

For selling the winning ticket, Dairydel will receive $10,000.

Standing at the news conference, Josephine Gracinger, 70, of Greenburgh congratulated Ramirez and prepared to buy tickets for the current $290 million Mega Millions jackpot. She hopes some of Ramirez's luck rubs off on her.

Rice, 60, of New Rochelle won the last top prize in the Triple Million scratch-off game. The game has been retired and replaced with another $10 game.

The retired sanitation worker purchased the ticket on March 5 at United Deli on North Avenue in the city. He went to the store to buy a loaf of bread.

"It's like a dream. It's like lightning striking," said Rice, a retired sanitation worker who buys lottery tickets a couple of times a week.

Rice said he will pay some debts but otherwise doesn't have any firm plans for his winnings, which will be paid out in $150,000 installments every year for 20 years. He will net $99,270 a year after taxes. 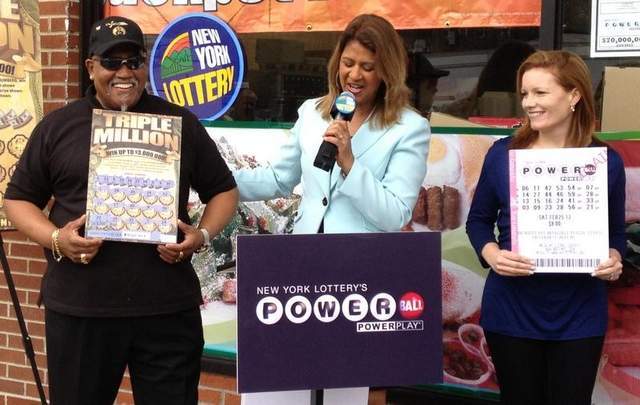