"They are happy for themselves, but I think it's really hitting them that the baby's future is going to be so affected," a family friend said.

But don't expect any Beyoncé-style preparations for the youngster. The father-to-be said he would take pains not to "end up one of those stories where you blow it all."

The goal, he said, is "just trying to be true to who you are, and hopefully you can stay the people who you were before."

Daniel Bruckner, born and raised on the West Coast, was nearly as stunned as the hard-luck New Yorkers who watched the Californian fill his carpetbags with cash.

Bruckner's New York connection is his wife Christine, a Long Island native who joined him at the suburban store where he purchased the winning ticket in the Dec. 27 drawing. He was visiting the in-laws over the holidays when the spirit came upon him to plunk down a buck on the day after Christmas. He typically stops by the store, King Kullen, in Middle Island, to shop when in town, and that's where he bought a meal and his millions.

"I picked up food for dinner and saw how big the jackpot was, so I decided to buy a ticket," the fortunate financier said.

He plunked down $26 for computer-generated Quick Pick tickets and headed home.

Bruckner didn't play a single lucky number, opting for a quick picks to cash in on his 1-in-175 million odds of winning. The newly minted millionaire thought so little of his chances that he didn't bother checking his numbers until the morning after the drawing.

And boy, was he stunned when he did.

Daniel's father-in-law alerted his daughter the next morning that the winning ticket had been bought at the same store.

"To humor him, I went upstairs and woke Dan up and said jokingly, 'My dad thinks you won. Go check your numbers,' " she said.

Daniel sifted through a few losing tickets before discovering the winning stub. The ticket had the Mega numbers 23, 32, 33, 39, 43 and a Mega Ball of 8.

"The numbers just lined up," he said. "It didn't seem real."

He stashed the ticket in a safe-deposit box before heading back to California for work.

With all of Long Island buzzing about the mystery winners for three weeks, the couple managed to keep their secret until yesterday's announcement.

"It's been very hard for me because I'm around my friends and family, and they're all talking about it because it's the big buzz, and I couldn't say anything," Christine recalled.

The couple was hesitant to answer personal questions, but Christine, who works in the mortgage business, said they had gone through stressful financial times in recent years.

The pair said the money obligations that had been looming over them — like student loans, a mortgage and other debts — will be wiped out instantaneously.

"This will help," Christine said with a smile.

Her husband said he will return to work in California — at least for now.

Friends and family streamed into the Bruckners' modest home to congratulate them yesterday. A portion of the winnings was dedicated to party supplies — two 12-packs of Corona, one of Dos Equis and one of Heineken Light.

The winning couple, whose San Jose home is worth more than $500,000, took a lump sum payoff of $101 million after taxes.

"I'm sure he'll have a lot of new friends he didn't even know he had before," neighbor Steve Rodriguez said.

Bruckner's high-school sweetheart and ex-wife, Dawn Reily, 35, said he deserved the jackpot — but couldn't help taking a potshot at her former spouse.

"I wouldn't say he was generous," said Reily, a single mom who lost her teaching job and is working three gigs to make ends meet.

Reily said she tried to contact Bruckner several times in recent years, but he failed to return her emails.

"I'm jealous. I'm so jealous. We could really use that right now," said the Ventura, Calif., resident. "Send some of that luck my way!"

San Jose neighbor Steve Rodriguez says the couple moved into a three-bedroom home a couple years ago, and just finished putting in a lush front lawn. Records show the house is worth more than $500,000.

Bruckner, the father of a small girlyoung daughter, is a friendly guy who's quick with a wave — but Rodriguez wonders if he's long for the neighborhood.

"I wish him all the luck and hope things don't change too much, but I know they will," Rodriguez said. "I'm sure he'll have a lot of new friends he didn't even know he had before."

The California couple demurred when asked what they would do with the money, saying they needed time to consider the endless options.

Three New Yorkers came oh-so-close to splitting the prize with Bruckner. None picked the Mega Ball number, leaving each with a $250,000 prize.

Bruckner said he had played the Mega Millions a few times prior to his victory, but never won more than a few bucks.

Rodriguez, a 20-year resident of San Jose, said he was looking forward to welcoming his now-megawealthy neighbor back home.

Mega Millions is a multistate lottery game that picks winning numbers twice a week.  California and New York are two of 42 states that participate, along with the District of Columbia and the U.S. Virgin Islands. Bruckner's winning numbers were 23, 32, 33, 39, and 43, with Mega Ball number 8. 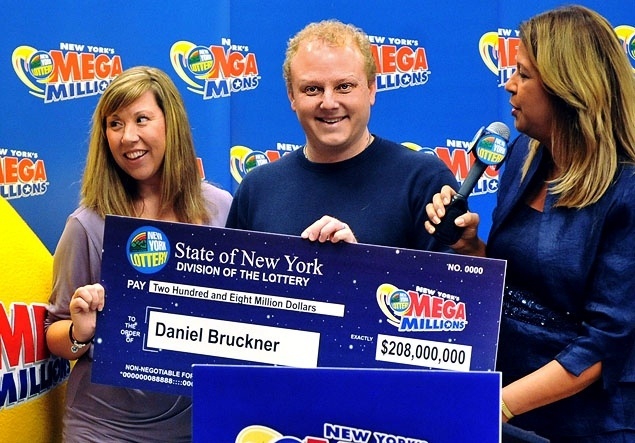 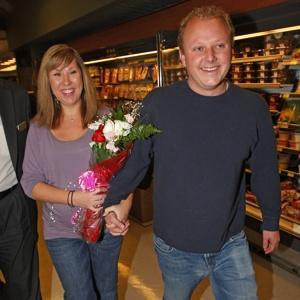 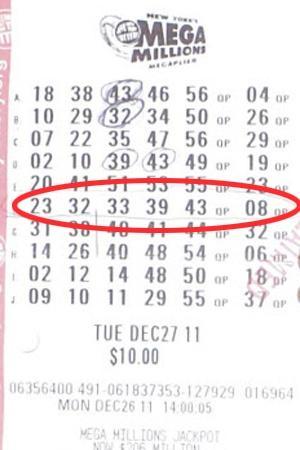 Mega Millions winner selling $26M mansion due to son's health says the home has been a 'blessing'Nov 20, 2018