John Holder must have felt like he couldn't win for losing.

The 45-year-old Columbia resident worked as a roofer until a back injury forced him to live on disability benefits. He's resided at an assisted living facility since December.

Then on Sept. 2 Holder's luck seemed to change. That's when he bought a winning scratch-off ticket worth $50,000 from a local convenience store. That same day, the ticket went missing.

He purchased the $2 "Jumbo Bucks" instant ticket at the Gulf station at 235 E. James Campbell Blvd. in Columbia while with a friend and a neighbor who had asked him for a ride. When they got back in the car, Holder's neighbor asked if he could hold the ticket.

He said he drove his neighbor home. The ticket was nowhere to be found.

Holder reported the ticket missing to the Columbia Police Department and the Tennessee Lottery. He told them surveillance videos at the convenience store recorded the winning transaction.

Luckily for Holder, his signature was on the back of the ticket. A winning lottery ticket is worth cash to anyone who finds it until it's signed.

But without the original ticket, it was unclear whether he would ever receive his prize.

Then an anonymous envelope containing the winning ticket was mailed to the Tennessee Lottery headquarters in Nashville. The letter-sized envelope had no return address, and only the number "50,000" was written on the outside. It was postmarked "Nashville, TN." No message was included other than the words "lost and found" written on a piece of notebook paper folded inside.

Lottery officials called Holder Wednesday to tell him the ticket was found. After verifying the signature and Holder's identification, the ticket was validated and he collected his prize Thursday.

"I'm speechless," Holder said in a lottery press release. "It's good to know someone had a conscience and decided to give this back to me."

A copy of the ticket is now part of a permanent display at the Gulf Station that sold it. The clerk who sold the ticket said Holder's winnings are the largest the store has ever seen."We're delighted this all worked out, and it's a great lesson for all our winners. Always sign your ticket," said Rebecca Hargrove, president and CEO of the Tennessee Education Lottery Corporation.

Holder said he plans to use his winnings to help his two daughters and to catch up on bills.

"I figured the ticket was gone," Holder said.  "I figured it was burned, destroyed, torn up, something.  I mean, if I had stolen a $50,000 ticket, that's what I would have done with it.  I'm not going to go give it back to the person I stole it from."

"All I can say is thank you. They didn't destroy it, so no hard feelings."

Rebecca Hargrove, President and CEO of the Tennessee Education Lottery Corporation said, "Thankfully, Mr. Holder followed the recommendation from the store clerk where the ticket was purchased and signed it on the back."

"We're delighted this all worked out, and it's a great lesson for all our winners.  Always sign your ticket."

Columbia police could not be reached Thursday to discuss the status of the investigation. 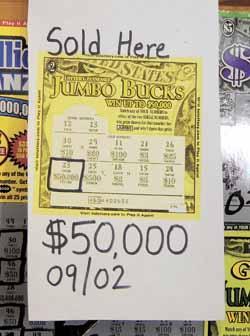 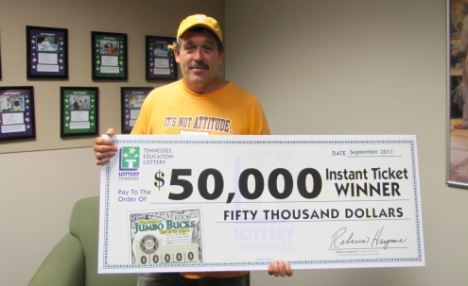