Western New York's newest millionaire thought she had made a mistake when she scratched off the winning space on the state Lottery's new Smooth 7s instant game.

"I thought I must have scratched something wrong," Debra Mauro said Thursday as an oversized symbolic check for $1 million was presented to her by Lottery emcee Gretchen Dizer.

"I thought it just had to be a mistake," the 54-year-old grandmother said at the Tops market at 7200 Niagara Falls Boulevard, where she bought the winning ticket Feb. 3.

"I never played Smooth 7s before," Mauro said. She bought the ticket from a vending machine as she was on her way to work as an associate manager at the nearby Regal Cinemas.

She said she wasn't quite sure what to think when she scratched the ticket during a break at work. When she finally convinced herself that she really had a winner, Mauro said: "It's like eating your favorite candy bar ... very sweet."

With some of her family present at Thursday's presentation ceremony, Mauro said: "It's still overwhelming, very overwhelming. It's not comprehending yet. I don't believe it."

Nevertheless, she has a few ideas about what to do with her new wealth. First on the list is a new snowblower and then a new roof and furnace for her house in the city's LaSalle section.

Then, she said, she would make promised contributions to the St. Jude Foundation and to Women & Children's Hospital. "I don't need luxuries. I already have everything I need," Mauro said. But her first stop after leaving Tops on Thursday afternoon would be "at the Dollar Store."

Mauro is a native and lifelong resident of Niagara Falls, with three grown children and five grandchildren. Some of the grandchildren, attending Thursday's check presentation, jumped for joy, clapped their hands and chanted, "Yea, Grandma."

She said she buys about $20 worth of Lottery tickets every two weeks and has had some smaller winners, "but nothing like this."

Asked whether she might consider moving to a new home, she answered: "No, not yet, anyway. Not for at least another year." She added that she planned to continue baby-sitting some of her grandchildren in the daytime and working at her theater job in the evening. "That's my life," she said. "That's what I do."

As is the case with most New York State instant (scratch-off) lottery games, the top prize will be paid at $50,000 a year for 20 years. After the first payment, Mauro will receive an annual check of $33,015, after deductions for taxes, through the year 2029.

Mauro is the first Niagara County player of the Lottery to claim a $1 million prize this year. Other recent Lottery millionaires from the county include Betty Ross of Niagara Falls, who received her prize on the Price is Right instant game in April 2009.

Dizer, who presented Thursday's prize, is a former Town of Tonawanda resident and graduate of Sweet Home High School and Niagara University. She said the Smooth 7s game was added to the state's Lottery lineup about two months ago. The tickets cost $5 each. 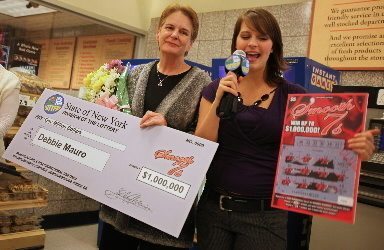