Odds are, stunning coincidences can be expected

Lotteries show that through sheer numbers, the uncanny happens; in Bulgaria, the same combination won twice in one week

History isn't supposed to repeat itself in the lottery. But earlier this month, a 1-in-5.2 million shot came through in Bulgaria, as the same six winning numbers turned up in two consecutive drawings. And 18 Bulgarians profited by betting on recent history: They chose the winning combination of numbers from the drawing four days earlier — which hadn't been selected by anyone the first time around — and split the pot.

The coincidence drew international news coverage and sparked a probe by a government-appointed commission. Bulgarian officials ultimately chalked it up to coincidence.

That might seem dubious upon first glance. But with millions of people choosing numbers in hundreds of lotteries around the world each week, coincidences are bound to happen. And they have, many times, including repeat winners and repeated numbers in other lotteries that didn't receive the international attention of Bulgaria's déjà vu drawing.

With so many numbers colliding each week, the lottery might be the ideal proving ground for something that statisticians have long recognized: Given enough opportunities, the seemingly impossible becomes plausible. "Coincidences aren't really surprising," says David M. Smith, a statistician who wrote a blog post about the Bulgaria lottery. "Unusual things happen all the time, but only some of them are remarkable."

The general principle guiding Mr. Smith and other mathematicians and statisticians in their blasé reactions to the reappearance of the Bulgarian lottery's winning 4, 15, 23, 24, 35 and 42 is that this would have happened eventually. There are lotteries in dozens of countries, and multiple ones within countries — scores in the U.S. alone. Many of these lotteries have had multiple drawings each week for decades. If there have been, say, a million lottery drawings, then a coincidence as unlikely as this one becomes more of a 1-in-5 yawn. That still means that any one player's chances of winning the lottery are close to zero.

The probability of Bulgaria's repeated winning numbers became a subject of some disagreement. A Bulgarian mathematician estimated the probability at 1 in 4.2 million, a figure that was widely reported. Clio Cresswell, a mathematician at the University of Sydney in Australia, came up with 1 in 14 million. Many others arrived at 1 in 5.2 million.

One explanation for the wide range is that Bulgaria has multiple lotteries. Dr. Cresswell's calculations relied on a different Bulgarian lottery with numbers ranging from 1 to 49. Mr. Smith and others made their calculations assuming the possible numbers went up to 42, the correct range for this particular lottery. As for the 1-in-4.2 million estimate, the Bulgarian mathematician didn't respond to requests for comment.

Other lottery coincidences in the past have been deemed more remarkable. In 1986, Evelyn Marie Adams won the New Jersey lottery for the second time in four months, an outcome called a "1 in 17 trillion" long shot in a New York Times article that attributed the figure to state lottery officials. That calculation overstated things quite a bit, by answering the question, "What was the probability that those two particular tickets would win?" rather than, "What was the probability that somewhere in the U.S. in 1986 someone would win the lottery for the second time." The odds of that happening were closer to 1 and 10, according to a pair of Purdue University statisticians who reframed the question in a published letter to the editor.

Lottery coincidences abound. The Columbian newspaper of Vancouver, Wash., got a visit from an Oregon detective in 2000 after it published the next day's winning numbers for the Pick 4 Oregon Lottery, 6-8-5-5. It turns out that a deadline rush to fill in the prior day's winning digits led to a mistaken retrieval of Virginia's numbers rather than Oregon's. Those winning Virginia picks coincidentally ended up being the same as those that won in Oregon's lottery the following day.

Satori Publishing, a Michigan City, Ind., company that maintains a database of winning lottery numbers, dug through more than 750,000 prior lottery drawings in search of repeat winners at the request of The Wall Street Journal. It didn't find any consecutive victories for the same set of numbers in pick-five or pick-six games, but did find four instances in which a set of five numbers won more than once, though not consecutively, in the same lottery: once in Poland and three times in Pennsylvania.

Bulgaria stands apart because the drawings were consecutive and featured six numbers, making the coincidence even more unlikely. But the attention it drew is consistent with a widely held misconception that there is a system or order that makes sense of random processes. Some lottery players believe that winning lottery combinations can be reasoned out, or that a recent set of winning numbers is less likely to win again than any other combination.

That 18 Bulgarians correctly guessed the numbers on Sept. 10, after none had on Sept. 6, added to the suspicion of wrongdoing. But this could merely reflect one of the common betting strategies for lottery players seeking a system.

Don Ylvisaker, professor emeritus of statistics at the University of California, Los Angeles, tabulated 19.9 million sets of six numbers entered into California's Super Lotto on April 7, 2004. The second most popular set of six numbers entered was the winning combination from the prior drawing. Also in the Top 10 were 1 2 3 4 5 6 and two combinations listed on the back of tickets as sample numbers in directions for entering the lottery.

Other studies of lottery entries show that numbers 31 and lower are chosen more frequently than higher numbers, possibly because bettors incorporate birthdays into their selections. So a smart entrant would choose higher numbers, and skip other combinations likely to be popular so as not to have to split the pot. While betting the last drawing's numbers paid off for 18 Bulgarians, it wasn't a strong strategy because they had to share with each other. Of course, now that 4, 15, 23, 24, 35 and 42 have come up twice in a row, they may seem particularly meaningful to future bettors seeking order in randomness.

UCLA's Mr. Ylvisaker is precluded by contract from betting in the California lottery and by geography from entering Bulgaria's, but he did place one gamble: "I wager this combination will be played in the Bulgarian lottery for a very long time." 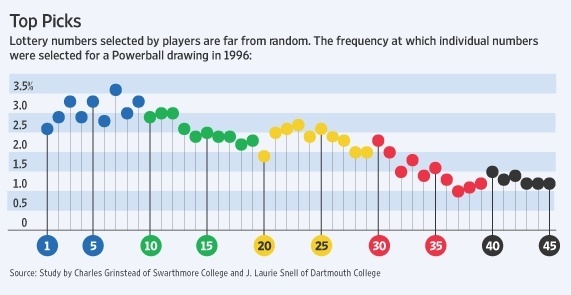 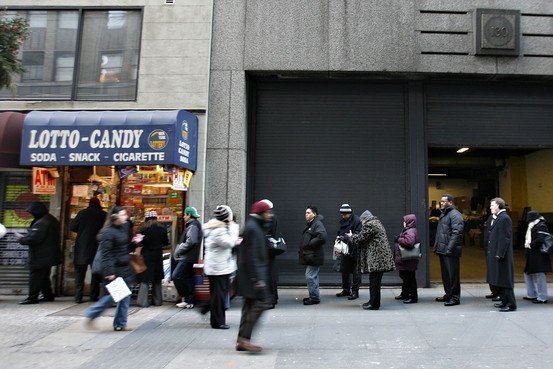 Gaming the lottery was this couple's retirement planMar 1, 2018

Statisticians search for how to beat the lotteryFeb 20, 2013

Lottery leaders convene in D.C. to discuss future of gamesApr 26, 2012