Lest there be any confusion, David Moyer and Peggy Park want everyone to know morale is now high among employees at Oakleaf Village of Toledo.

Scratch that. Practically everyone, including the retirees, were going bonkers Wednesday after learning that 24 of the 77 employees at the retirement home had just won $250,000 from the Ohio Lottery's Mega Millions game. They hit on five of six numbers with their best ticket.

Mr. Moyer, the facility's general manager, and Ms. Park, its care director, were among those who threw in a buck and are entitled to their 1/24th portion of the winnings. They figured out that those who participated will come away with a cool $7,187.50 after taxes.

Workers at the facility, at 4220 Holland-Sylvania Rd., have done an informal office lottery pool for 15 years. They usually only play when the pot exceeds $200 million. The jackpot now stands at $325 million, given that there was no jackpot winner in Tuesday night's drawing.

While they fell one number short of the big prize, employees were delirious about their $250,000 winning.

Joyous workers said there was far more hootin' and hollering than one would expect from a normally sedate retirement home as they celebrated the win and started to decide how they would spend their winnings.

"The residents are very happy for us," Mr. Moyer said.

So is the facility's postal carrier. The mailman was among those getting in on this office pool entry, he said. 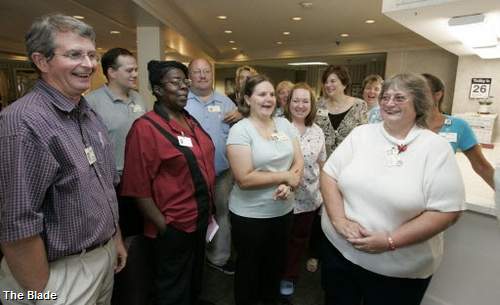