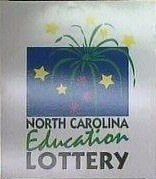 North Carolina Lottery officials had to pull the plug on their new logo after it was learned that copyrighted material was used to make it.

After pulling the logo, lottery officials made efforts to conceal the logo from public view by asking media outlets to not show it.

Lottery Post feels that if CBS News can knowingly display forged documents to hurt President Bush in the weeks before a presidential election, then showing a small logo graphic is not too bad.