When it comes to the lottery, there are lots of games, and we all know they're games of chance. When we play, we expect a fair chance.  But that's not always the case.  Eyewitness News learned your odds of winning were hurt at times - sometimes by thieves stealing entire cases of lottery tickets and other times by the very people selling you the tickets.

Drew Lowe was a clerk at a Brownsburg Shell Station until he was caught doing something the lottery calls "fishing" - when an employee literally fishes for winning tickets and leaves the losers for you.

Every lottery ticket has a security code on it needed when a clerk scans it to see if it's a winner.  Some clerks scratch off just that code and plug it into their terminal to figure out if it's a winning ticket.

Lowe admits that's what he was doing - trying to skim winners out of the pile.

"If it said not a winner, it clearly wasn't a winner," he said.  "If it said invalid prize amount it was a winner.  I'd buy the ticket, scratch it off and redeem it there." 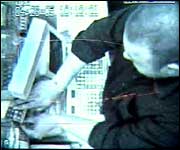 If the ticket was a loser, he'd put it back in the stack, and since the face of the card wasn't scratched, most times customers never realized.

Lowe was caught, prosecuted and got probation.  He now has a baby on the way and is trying to turn his life around.  But he's far from alone trying to cheat to win.

Hoosier Lottery Security Director Ellen Corcella said she thinks clerks have been getting away with fishing for a long time.  She said she was appalled to see the number of inside jobs when she took over the position this year.

Corcella just implemented a new security measure that sends her computer alerts on any unusual scanning activity at lottery terminals.  She then sends an investigator to get the surveillance tape from the retailer and find out what happened.

"Here's the clerk at the dispenser and he's taking tickets out and there's no one in the store," she said, referring to surveillance video taken at the Emerson Avenue Shell station.  Lottery computer records show a clerk at the station scanned the same ticket 33 times in just a half hour.

"Quite frankly, how stupid of them, because they're gonna get caught," Corcella said.  "They know there's a 24-hour surveillance camera on them."

When officials reviewed the tape, it was unclear whether the clerk was fishing, but it was clear he played scratch-off tickets all night long during his shift, which is against the law.

"He was immediately terminated," said Sandra Ray, another clerk at the Emerson station who was the one who spotted a problem.

"He'd pull three of them out, throw those to the side and steal them from the inner row and then put them back when he was done," she said.

"You can see her scratching the ticket right there in plain view," Corcella said.

Adamitis is now fired and charged with theft.  She said she doesn't understand why it's illegal for clerks to play tickets in their own store.

"It's possible for an employee to count tickets," she said.  "If somebody comes in and buys 10 tickets and there's not a winner, they know there's going to be a winner on there soon."

In addition to sending out investigators to follow up on any irregular scanning, the lottery is redesigning scratch-off tickets to try to stop clerks from fishing.  In the past, the security code was always in the same spot, making it easy to find and scratch without damaging the rest of the ticket.  Now the lottery plans to float the code in different spots so a clerk can't find it without making it obvious they tampered with the ticket.  Some redesigned tickets are already in stores, but it will take several months to cycle in all of them, so players should look closely when they buy scratch-off tickets.

Lottery officials hope the increased security efforts will have a chilling effect on illegal activity.  It's all part of a security crackdown aimed at improving the odds for paying customers.

"Our playing customer is entitled to a fair game and a game of integrity," Corcella said.